Felicitas Rauch picks up speed on the left wing and puts the ball through to Klara Bühl.  The  crosses a little too high into the penalty area, so that no other player can get to the play equipment.

Martina Voss-Tecklenburg’s eleven are very broad in the build-up of the game and full-backs Sydney Lohmann and Kathrin-Julia Hendrich advance equally. As a result, the DFB women often have a clear majority in the midfield.

The  guests usually just run after them.

The  initial phase clearly belongs to the German women, who have more play and let the leather run smoothly through their own ranks. With the early goal in the back, it goes all the better, of course. 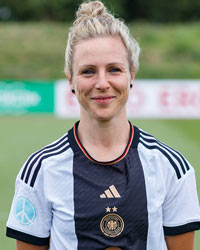 Goal for Germany, 1-0 through Svenja Huth

Lightning start – first attack, first goal! After 90 seconds the ball is already in the net. In the left half of the penalty area, Klara Bühl prevails strongly against Laura Deloose and fits the pill in front of the box.

The re Svenja Huth runs in perfectly and pushes the ball over the line.

The  ball is rolling on the Tivoli in Aachen! Which team gets off to a better start?

In Belgium, coach Ives Serneels swaps personnel in two positions compared to the bankruptcy against the Netherlands. Charlotte Tison and Lenie Onzia start for Davina Philtjens and Davinia Vanmechelen.

Due to regulations of the federal government for countries with mutated coronavirus variants, the national coach has to do without Ann-Katrin Berger (Chelsea), Melanie Leupolz (Chelsea), Turid Knaak (Atlético) and Leonie Maier (Arsenal).

Martina Voss-Tecklenburg’s team last met Ireland in the last match of the European Championship qualification in December and won 3-1 at Tallaght Stadium.

The  goals were scored by Lina Magull and Tabea Waßmuth, who scored twice.

On Thursday Belgium met the Netherlands and went down 6-1. Marie Minnaert scored the only goal for the Belgians.

Europa League: Arsenal a size too big for Rapid

“Government must now switch on the vaccination rate”