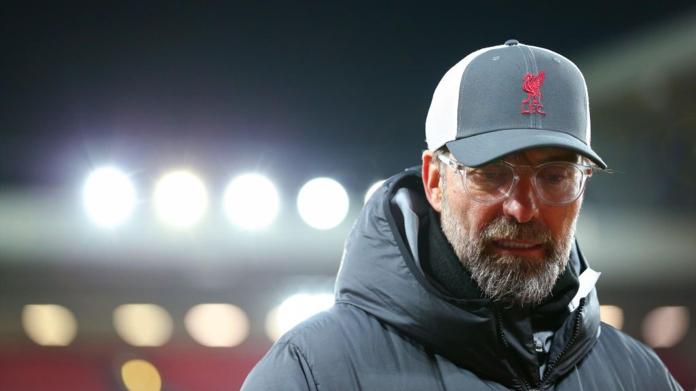 It’s like an uncontrollable reflex that is triggered over and over again in the football business more than in any other sport. If a club continues to fail, the coach can often get tight in record time. But does that also apply to Liverpool?
A legitimate question, after all, Jürgen Klopp is the man at the helm who led the club from the no man’s land of the table to the European throne in just six years in office. Under Klopp, the Reds won the first Champions League title since 2005, and even more important: the first English championship in 30 years.
Premier League

Klopp grapples with Everton’s assistant coach: “Why are you laughing?”

Let’s be honest: what sporting crisis would justify dismissing this man?

“A scenario in which Klopp is fired is hard to imagine. Even if they miss the top 4,” says Pete Sharland, Premier League expert from Eurosport UK in London. “ The  only possibility that Klopp and Liverpool would split up would be if he decided to resign himself. But that is also very unlikely at the moment.”

Good for those who have such a standing. Because the latest sporting developments on Anfield would have presumably brought any other coach at least to the brink of dismissal.

Two wins from the past eleven league games, four home defeats in a row, which has not happened to any reigning English champions for almost 100 years (last in 1929) – there are also a lot of injury concerns and the fall to sixth place in the table with five points behind a Champions League Qualification rank.

Liverpool has reached the lowest point of the Klopp era – no question about it.

After all, the downward spiral that has been going on for weeks can be at least partially explained.

For months, Liverpool has been running on the gums in terms of personnel – especially on the defensive. Virgil van Dijk has been absent since last October due to a torn cruciate ligament, with Joe Gomez (patellar tendon problem) and Joel Matip (ankle injury) the number two and three center-backs are also likely to be out for the rest of the season.

In the past few months, captain Jordan Henderson, who was injured in the 2-0 defeat in the Merseyside derby against FC Everton, was also injured in central defense.

“It’s the thigh, the adductors, and nobody from the medical team is in a positive mood. It doesn’t look good,” said Klopp after the game.

The  fact that the Turkish international was already in the starting line-up in the Champions League against RB Leipzig as well as in the last two league duels at Leicester City and against city rivals Everton shows how the English champions are in their last line.

Reds: Successes have to be processed

Great personnel worries, the general tension due to the coronavirus pandemic, hardly any time to process what has been experienced. All of this is currently more difficult for the champions than other clubs. It’s been just eight months since the seemingly endless time ended without a championship title – really celebrated and somehow processed, but the triumph has not yet been achieved.

It is nothing new that mental problems can arise after winning a title, especially after such a long wait. It is important to process successes in order to realign the focus. This not only applies to the players, but of course also to the coach.

Klopp is known as probably the best motivator in the business, so should be able to instill the well-known hunger for titles in his troops again. But what if that doesn’t work? What if the crisis in Liverpool continues in the coming weeks and suddenly missing the Champions League is no longer just a distant nightmare?

Noticeable parallels to the BVB time

All experts agree that Klopp will not be sacked in Liverpool. But that was not the case in Dortmund either. Even at BVB there was a crisis around the 300th competitive game as a coach, after almost all successes were reported before.

After the first half of the 2014/15 season, Schwarzgelb was in a crisis except for a relegation place, and on the 18th matchday they even ranked last in the table. Thanks to a significant increase in the second half of the season, Borussia made it into the Europa League, but the Klopp era ended at the end of the season – at the request of the coach.

Could it be like this in Liverpool? Sure, but we are still a long way from that.

“I think he’s going to get a seventh season,” Sharland said. However, if there are no obvious signs of improvement, a split in the coming season isn’t all that unrealistic, according to Sharland.

“Liverpool and Klopp have a special connection but football, and the Premier League in particular, is a results-driven business. Just look at Frank Lampard and Chelsea.”

The  blues legend also had an exceptionally close relationship with his employer, but fell victim to the usual mechanisms of the coaching job because his multi-million dollar team did not work. Thomas Tuchel finally took over and brought quick success.

If Klopp goes, there can only be one !?

At Klopp, however, the situation is different. “

The re is actually no candidate who could replace him.

The  only one that comes to my mind is Julian Nagelsmann. But it looks like this is from Real Madrid and Bayern Munich targeted, “said Sharland, who, as a Liverpool expert, has long been an advocate of an exciting thesis.

“I’ve always said that I believe Klopp will leave Liverpool when his contract expires in 2024. I think Liverpool are hoping Steven Gerrard will get the chance to coach a Premier League club over the next three years – ideally already this summer after winning the Scottish Championship.

Open words: Klopp over resentment against Everton because of van Dijk

Defense under Sforza a flop – that’s why FCB is not...

New escalation of violence at Georgina and Kubilay: “For four days...

Coronavirus: The vaccination is here. When will normality come?