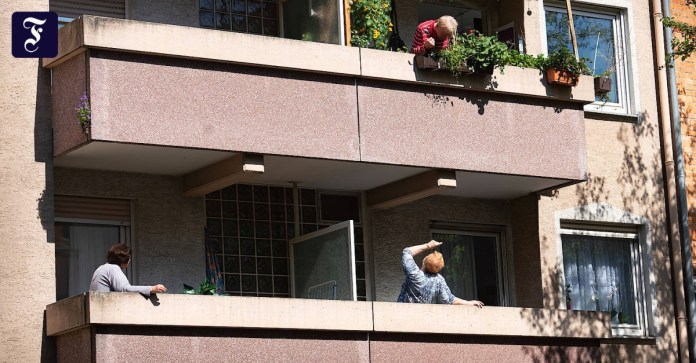 IIn the corona lockdown, many Germans long for more space, an additional study or a larger terrace. In reality, however, tenants in particular have to bury these dreams in view of the rapidly rising prices. “Especially in tense housing markets, many tenants stay in their old apartments because they cannot afford a larger one,” says real estate economist Pekka Sagner, describing the situation in an interview with FAZ. In the metropolitan regions, the construction industry is already reacting to the phenomenon: “In the cities, smaller apartments are being built than before.”

In a report for the Institut der Deutschen Wirtschaft (IW), which appears this Monday, Sagner traces exactly which groups live in how much space in Germany.

The  average German has exactly 41 square meters available for himself.

The  “top 10 percent”, that is, the people with the most surface area, can spread to more than 83 square meters per head.

The  “bottom 10 percent” have a maximum of 22 square meters to themselves.

If the total living space is considered instead of the living space per person (regardless of how many people live in the property), then the average apartment in Germany is 100 square meters.

Owners have a lot more space than tenants

However, there are enormous differences between owners and tenants. Property owners live in an average of 125 square meters, while the average rental apartment is only 75 square meters. An owner has 48 square meters per person, while a tenant only has 35.

The  big differences are not only due to the fact that homeowners have, on average, significantly more assets than tenants. Another major reason is that tenants mostly live in cities. In rural areas, where living space is relatively cheap and therefore more spaciously built, the ownership rate is around 75 percent according to the IW, and only one in four lives to rent.

The  ratio is reversed in the big cities, where three out of four people have to pay rent.

If you want to compare your living space with the space that other people in Germany have available, you can do so with this interactive graphic from IW Cologne. It shows the distribution of apartment sizes in Germany.

The  curve on the left represents the total population: from small apartments (below) to large apartments (above). Where the curve rises, the number of people with this apartment size increases. You can select further sub-groups and compare them with one another, for example different age groups, household types and educational levels:

The  continued sharp rise in rents will also be an important topic at the federal government’s residential summit on Tuesday. Even before the summit, Federal Justice Minister Christine Lambrecht (SPD) announced further steps in the newspapers of the Funke Group to curb the rise in rents. “We will restrict the conversion of rental apartments into condominiums more strictly,” said Lambrecht. In addition, the rent index law will be reformed to make its instruments more effective.

The  IG Bau trade union sharply criticized the housing construction policy in recent years. Because the state pays for the rents of Hartz IV recipients, the taxpayer also pays the costs of the “rent explosion”. Accordingly, the rental prices for apartments of Hartz IV recipients with the simple standard rose from the beginning of 2015 to October 2020 from 5.43 euros basic rent to 6.96 euros basic rent per square meter. This increase of 28 percent is offset by a rise in consumer prices of just 7.5 percent. If rental prices had developed in line with consumer prices, the federal government and municipalities would have saved 1.9 billion euros.

The  goal of the federal government to increase the proportion of homeowners is now a long way off. Two months ago it became known that the percentage of households that lived in a home had fallen for the first time since 1993. According to an analysis by the research institute Empirica, the home ownership rate was only 42 percent in 2018, one percentage point less than five years earlier.

As economist Sagner now writes, the development affects younger people in particular. According to this, the proportion of under-45 property owners has halved since the turn of the millennium and was only 15 percent in 2018.

The re are several reasons for this unpleasant development. Firstly, the purchase prices in the cities are rising rapidly, so that younger people need more and more equity so that the bank can even grant them a real estate loan. “That is the biggest bottleneck,” says IW researcher Sagner. Second, the number of single households is increasing. In contrast to families, people living alone are often less eager to acquire property.

The  rural exodus, the immigration of many poor refugees, the increasing academization including later career entry and increasing mobility on the labor market are also depressing the ownership rate.

Final of the “Bachelorette”: Melissa has chosen her winner

Malfunctions and failures of the on-board computer

PSG: The Tuchel-Aus was so turbulent in Paris

Tens of thousands of bees died because of an unknown person

Fund industry in Germany with another record year – Economy: Current...

Mysterious illness broke out – 300 people in the hospital

In Berlin: cultural institutions are closed until at least mid-January –...