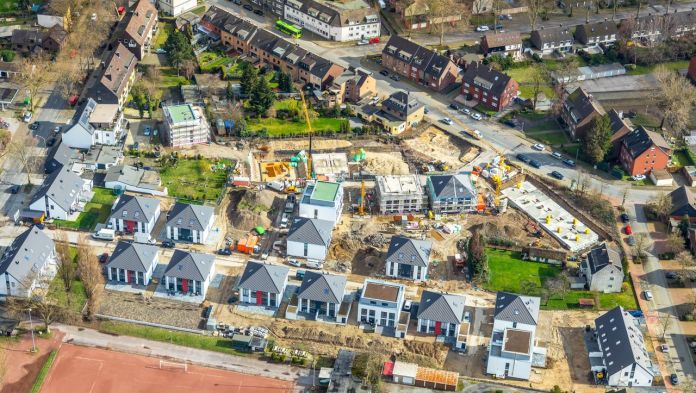 After almost a year in the pandemic, the experiences people associate with Corona are very different – but there is one point where they are almost all the same: You have never spent so much time in your own apartment. Whereby this shared experience can feel very different. Some learn to appreciate having their own room for each person and maybe even a garden.  The  others, on the other hand, painfully experience every day how small their apartment is. Housing is one of the central social differences that the pandemic has brought to light even more concisely.
Two and a half years ago, a broad alliance promised to fight this grievance: In September 2018, the federal, state and local governments, together with more than a dozen associations from the real estate and housing industry, tenants’ association, trade unions and the construction industry, decided on a whole package of measures to make more affordable To create living space. On this Tuesday, those involved now want to take stock together.

It is unlikely that this balance sheet will be clear: While Federal Building Minister Horst Seehofer (CSU) announced in advance that the agreed measures had been implemented and his ministry is keeping an almost completed checklist, representatives of the trade unions and the tenants’ association disagree:

The re is still too little and built past demand, and the number of social housing continues to decline.

The  political discussion about a possible ban on single-family houses in metropolitan areas has recently heated up the subject of living space again and added a new aspect.

In fact, according to official statistics in Germany, the number of people in overcrowded (i.e. too small) apartments rose by 340,000 to 6.4 million in 2019 – around one in eight cities is now affected.

But how do you actually live – spacious or cramped? Information about this is provided by an interactive graphic from the employer-related Institute of the German Economy (IW). It shows the living space situation not only for the total population, but for a total of 41 subgroups – which differ in terms of size of residence, family constellation, income, rent and property, type of building, education, gender, age or origin.

In this way, you can not only locate your own position within society as a whole, but also, for example, in the subgroup of single parents or tenants or single-family house residents.
To do this, enter your living space and the number of people in your household.

The n you can choose two different groups to compare yourself with.

The  tool shows your position in the respective group – specifically, how high the proportion of people is who have more or less space than you have available.

The  living space per person is decisive.

The  total population is selected as the standard on the left. By selecting a subgroup on the right-hand side, you can see not only your own position in this but also at a glance whether this group as a whole lives comparatively cramped or generously. In addition, instead of the per capita living space, you can also display that of the entire household – press the switch above the graphic.

The  basis is the latest data from the SOEP (Socio-Economic Panel), for which many thousands of people are interviewed every year and which is considered to be very reliable and meaningful. Specifically, the graphic depicts the living situation in 2018. Accordingly, around 41 square meters of living space per person is the limit between the upper and lower half of the population, from 83 square meters one belongs to the top ten percent.

The  graphic clearly shows the big differences in the housing situation of different population groups, as IW economist Pekka Sagner also notes in an accompanying short report. On average, owners live on around 48 square meters per person, tenants only on 35 square meters. “Only 23 percent of the tenants live in apartments that are larger than 100 square meters, the ratio is almost the opposite for the owners,” says Sagner. Single people and pensioners have significantly more space on average than households with children – but also as couples without children.

However, not all known factors for social inequality are reflected in living space. For example, academics and people with a secondary school leaving certificate and vocational training live on average in the same amount of space, namely 50 square meters per head.

In this context, it is important to distinguish between the median (i.e. mean) and average value: the median shows at which value exactly half of the population has more and the other half less living space – i.e. 41 square meters. For the average, on the other hand, the total amount of living space in Germany is divided by the resident population; this value is slightly higher at around 45 square meters because it includes exceptionally large living spaces at the upper end of the scale. Since three percent of academics have more than 150 square meters per head, they could on average live a little more generously than people with a secondary school leaving certificate, of whom only one percent live in such a large area.

Berlin: Pankow cannibal is guarded around the clock *** BILDplus content...

Christmas without a mask requirement at home – Wiener Zeitung Online

Storm on US Capitol: “Trump signals his fans: You are doing...

Corona range of motion: what does it mean? What are...

What happens to parking in cities