The  Aargau government council has taken a position on the Federal Council’s relaxation proposals.

The  thrust is right, he says. However, open terraces in front of otherwise closed stains are of no use.

Since the Federal Council made its proposal on the first easing steps of the shutdown last Wednesday, one aspect in particular has caused red heads: the catering industry remains closed. From April 1st, guests could again be entertained on the terraces, but the interiors of the pub should remain closed for the time being, and opening is not in sight until May 1st at the earliest.

The  Aargau government council counters this with a different proposal, as can be seen from the statement sent to the health directors conference on Sunday afternoon.

The  restaurants should be able to resume operations from April 1st, inside and outside at the same time, because:

“It would be desirable to open the terraces, but without opening the interior of the restaurants, the Aargau gastronomy companies cannot operate profitably.”

Even if a garden restaurant could be filled on a fine Sunday, the effort and income did not match. However, it is questionable how long the catering industry can cope with an official closure, the answer continues. “Despite the hardship cases in Aargau, which work very well, the establishments must be opened in a second step on April 1, 2021.”

In addition, the Aargau government council proposes that the restaurants in nursing homes should be reopened for relatives of the residents – in compliance with the strictest protection concepts and as soon as the residents have received the second vaccination.

The  Government Council welcomes the opening step, according to which cultural events with a limited number of participants and protection concepts are to be gradually made possible again from April. However, he would like a differentiation here: It is important not to stipulate rigid visitor numbers across the board, but to take into account the different conditions and room sizes of the events.

Furthermore, the general ban on amateur choirs does not seem feasible in the medium term. According to the government council, he would welcome the easing concepts developed together with the associations and their gradual implementation from April.

The  government council is in agreement with the controlled opening of the shutdown, as proposed by the federal council, but overall.

The  time intervals of four weeks for further opening steps are easy to understand and the strategy with a risk-based approach makes sense.

The  thrust is right,” said Health Director Jean-Pierre Gallati, but only on the proposed opening strategy.

The  start of the pilot project for mass tests is scheduled for March 1st – the canton also states this in its statement. Repetitive testing of asymptomatic people is seen as an important pillar in combating pandemics.

The  aim is to carry out as many tests as possible on asymptomatic people in the canton of Aargau. In a first step, tests are to be carried out once a week in five nursing homes, three care institutions and five schools.

Agreement on improvements for pedestrians in Berlin 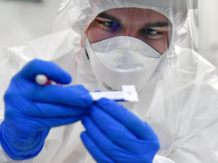