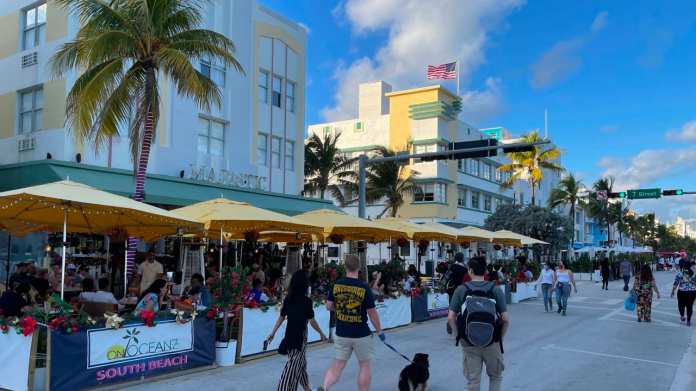 First Florida was in the corona pillory: Ron DeSantis (42) – a loyal companion of former President Donald Trump (74) – was one of the first governors in the USA to loosen the lockdowns after the first wave of pandemics.

And he never made a secret of the fact that he thinks little of wearing a mask.  The  fact is: In the southern state there is a grim record with 1.8 million infections and 27,814 deaths to date. But at the same time:

While citizens in California or New York are massively restricted by strict corona rules, in Florida it looks as if it would be 2019, with full restaurants, bars and shops:

The  sunny state is becoming a corona paradise!

People with masks? A rarity. In the current Corona statistics, Florida is still in the middle of the US states – and currently with better values ​​than New York, for example.

Because of the loose Covid rules, low taxes and constant summer weather, the sunshine state recently became a climber – with a massive influx of residents and companies.

It looks like Florida’s “business plan” as anti-California or anti-New-York is just about to work out.

The  boom came in waves

▶ ︎ First came the “refugees” from New York during the Corona hell last spring – and many got stuck in the south.

The  largest US moving company recorded a ten percent increase in removals from the state of New York to Florida last year: If it was first the fear of the virus, it is also the comparatively high taxes in the Big Apple, which are especially popular with the wealthy Take flight.

The  New York top broker Ryan Serhant even spoke to “Fox Business” of a “transfer of wealth”.

While real estate records have fallen silent in the ailing Big Apple, mega-deals are now being reported from Florida: An ultra-modern villa in Palm Beach is currently being advertised for 78.5 million dollars.

The n numerous tech companies moved their headquarters from overpriced Silicon Valley to Miami. Mayor Francis Suarez (43) rolls out the red carpet with his plans to develop the metropolis into a “hub of innovation”. An initiative for the wider acceptance of crypto currencies (Bitcoins etc.) is also attracting techies.

The  ace up the city boss’s sleeve: fewer rules and lower taxes. According to Philippe Houdard, founder of Pipeline Workspaces, the tech scene in Miami was “about to explode,” he told NBC.

▶ ︎ In the north of the now booming, mostly democratic Miami, a new conservative center of power is emerging at the same time around the residence of the former President Donald Trump (74): Trump continues to have great influence on the Republicans from his domicile “Mar-a-Lago” – in the end he repeatedly held court for key figures in his party.

Two of his children, Donald Jr. (43) and Ivanka Trump (39), have also settled in South Florida. Both of them speculate about future political careers.

Practical for the Trumps too: the conservative media company “Newsmax” has its headquarters in West Palm Beach. A downright political “Make America Great Again oasis” would have arisen here, observed the Washington Post.

Film production in the “Sunshine State” is cheaper

The  Florida trend is also affecting the entertainment industry: Kristian Krempel, “Grammy” producer and maker of the latest film with Katherine Heigl (42, “Fear of Rain”), had worked in Los Angeles for ten years when he was hired in Tampa, to produce films. “

The  actors used to go to Hollywood here and there was hardly any talent,” he says to BILD: “But that is changing!”

The  working and framework conditions in Hollywood are very tough, there is a lot of competition, it is expensive and taxes are high: “Now many actors are drawn to Florida,” said Krempel.

For him it is much cheaper to produce in the “Sunshine State”, which is a great advantage, especially for independent productions: “If you want to shoot in Hollywood, you usually need a million dollar budget!”

The  corona crisis would also be easier to cope with in Florida, he says: “Everything is pretty much open here, but in California and New York everything has been closed for almost a year – these lockdowns hit the film industry hard!”

Even if it is now allowed to shoot there again, the regulations there are extreme and above all expensive – testing, rewriting the scripts, forming smaller teams. “It is almost impossible to make a film without a two-digit million budget”.

The  producer: “Art and film suffer a lot from these restrictions!” In Florida, however, it would be easier.

He also likes the hands-on mentality: “

The  film crews are very willing to work and show enthusiasm and a positive attitude!”

The re are fewer claims than in LA – and wage costs are lower.

The  whole atmosphere in Florida would be much “more relaxed, pleasant and authentic”.

The  governor showed a positive attitude,” he says to BILD: “While Corona hit the film industry hard, Florida was always open and that’s why life goes on there and you can work. ”

The re are many in the industry who have moved to more conservative Florida for political reasons, but they would never openly admit it.”

Ashman on the pandemic: “California and New York have totally overreacted, they are still on pause mode while Florida continues to develop.”

Meanwhile, there is still another indication of the booming state’s rise: More and more airlines are replacing loss-making international connections for business travelers with more lucrative flights to Florida.

New York real estate entrepreneur Sean Black is now commuting between Miami and the Big Apple. His family wanted to go to Florida, he says, mainly because schools are open there.

New York would be in a less competitive situation, especially compared to up-and-coming cities like Miami: “

The  greater risk of contagion due to the population density, the increasing crime rates and, quite frankly, the entire pollution of the city has made many move”, says he opposite BILD.

He doesn’t want to write off New York entirely; But the destination Florida is very popular a year after the outbreak of the corona pandemic.

“Met Stars Live in Concert”: The end of the year comes...