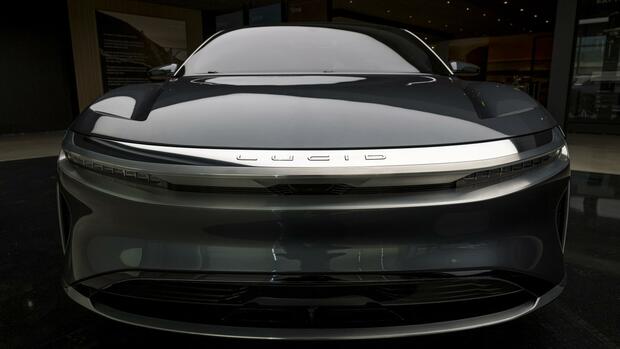 The  takeover by CCIV, a so-called Spac, should be completed in the second quarter of this year.

Lucid is the hottest-anticipated IPO in the electric car scene, which is already glowing with enthusiasm.

The  headquarters in Newark, California is less than half an hour’s drive from Tesla’s largest plant in Fremont.

Tesla’s unprecedented stock market rally to the currently 700 billion dollar market capitalization of the world’s most valuable automaker has only sparked this enthusiasm. Lucid is valued at $ 24 billion in the transaction – almost half of BMW’s market value. While the Munich-based company sold 2.3 million cars in 2020, Lucid has not yet produced a single one.

The  start of production of the luxury limousine Lucid Air in the specially built plant in Arizona was even postponed from March to the second half of the year with the announcement of the IPO.

Originally, the first Lucid Airs should be delivered in the USA in spring, but the model should also come to Europe this year, as Hochholdinger had announced in the Handelsblatt. What will become of this plan is unclear. When asked, Lucid did not comment. Lucid currently employs almost 2,000 people, with around 5,000 expected by the end of 2022.

The  complex Spac deal is made up of two components:

The  merger with CCIV values ​​the new company at 11.75 billion dollars, while investors such as the Saudi sovereign wealth fund PIF are giving the merged another 2.5 billion dollars in a so-called PIPE deal Company, bringing the total valuation to $ 24 billion.

This construction is necessary because CCIV must acquire a majority in Lucid in order for the new entity to be listed. CCIV only raised $ 2.1 billion when it went public.

The  PIPE transaction provides CCIV with the additional capital it needs to purchase Lucid. In total, the new company will receive $ 4.4 billion.

The  Saudi state fund is Lucid’s central investor and puller behind the IPO: When the startup was about to go bankrupt in 2018, the kingdom’s fund secured a majority in Lucid with an injection of 1.3 billion dollars. Lucid’s chairman is Andrew Liveris, long-time Dow Chemical boss, who advises the PIF and sits on the board of directors of the state-owned oil company Saudi Aramco.

Michael Klein, who floated the CCIV on the stock exchange, also has close ties to the regime of King Mohammed bin-Salman: Like Liveris, the ex-Citigroup banker advises the PIF and, as a banker, supervised Saudi Aramco’s IPO at the end of 2019. According to Bloomberg, Lucid is currently negotiating to build his second plant in Jeddah, Saudi Arabia, possibly with financial support from the PIF. It would be the first auto plant in the country.

Since Bloomberg first reported negotiations between CCIV and Lucid in early January, the rate has increased six-fold from $ 10 to just under $ 60. After the merger was announced, it fell by a third to $ 40 after the hours because the investors in the PIPE transaction received their new shares for $ 15 and diluted previous CCIV shareholders accordingly.

The  price explosion caused by the Lucid rumors shows how much the market trusts the startup. Other e-car startups in the pre-production phase such as Fisker or Canoo are only worth single-digit billions.

Lucid relies on its technological lead in battery and drive technology, which should come to fruition through its own production. This should be demonstrated, for example, in the fact that the Lucid Air, at 832 kilometers, has a longer range certified by the US environmental protection agency EPA than all Tesla models.

The  goal is not to compete with Tesla, emphasize Rawlinson and other Lucid managers. Rather, the $ 169,000 Lucid Air Dream Edition is a direct competitor for the Mercedes S-Class.

Corona history: which two alarm signals you should watch out for

FC Barcelona: Philippe Coutinho should be sold cheaply – for financial...

Suspected case: AfD is observed by the Office for the Protection...

Citizens are not interested in planning for the capital region

Smallest engines in the world – the Mars mission would not...