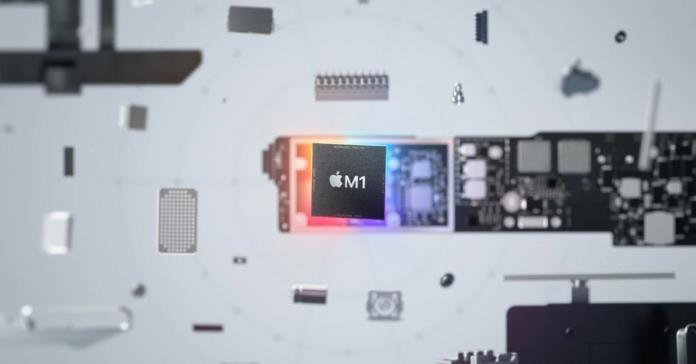 Of course, Apple’s announcement of Apple Silicon Macs in November 2020 came as no surprise.  The  move away from Intel processors was announced as early as the summer and a small outlook on the future was given. In late autumn, a Mac mini, a MacBook Air and a 13 “MacBook Pro were presented.

The  latter has been available since then with Apple’s M1 chip and also Intel processors. According to rumors, the large 16-inch model will soon follow it needs a somewhat stronger chip.

M1X chip is supposed to fuel the new MacBook Pro

A drilled-out version of Apple’s M1 chip has now appeared on the CPU Monkey website. While the authenticity cannot be clearly clarified, the data appear to be quite realistic and thus fuel the rumor mill about the 2021 MacBook Pro.

According to the benchmark, the M1X chip should have a 12-core CPU with 3.2 GHz each and be manufactured in a 5-nanometer process. In comparison, the M1 chip only has 8 cores with a similar clock rate. It looks even rosier on the graphics unit side. Here Apple is supposed to increase the performance significantly. Instead of 8 graphics cores, a stately 16 cores should be used, while up to 16 GB RAM should be supported. With this, Apple could leave the graphics performance of all integrated GPUs behind and even come close to current high-end graphics cards.

The  new chip could, however, be used in several models. In addition to the 16 “MacBook Pro, the iMac is also a hot candidate. Apple could also replace the 13” MacBook Pro with a 14-inch model and divide it into two categories.

The  M1 chip could be offered for beginners, while it can optionally be equipped with the better M1X chip. At this point in time, it is unclear whether Apple will allow more than 16 GB of RAM, as some high-performance applications such as Photoshop or Final Cut Pro like to require a little more RAM.

What do you think of the rumors? Let us know in the comments.

Frankfurt: After a fatal accident caused by an SUV speeder –...

The Xiaomi Mi 11 Ultra has a back display for main...

After the death of Sarah Everard: Johnson is in a bind

Scholz: Will grow out of this crisis – Germany and worldwide

Oh, how beautiful … Ten Swiss triumphs in the lion’s den