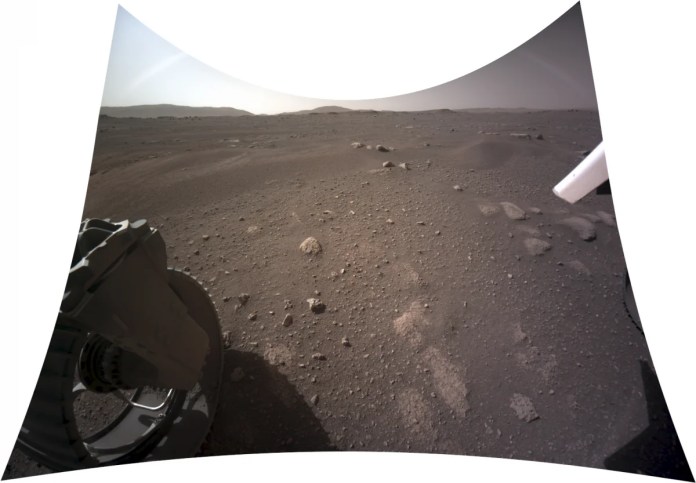 Four days after the latest NASA rover Perseverance landed safely on Mars, the US space agency received more and more data, including a series of images. So far, however, only some of the Hazcams, which are always mounted in pairs under the rover and are intended to detect dangers, have been published.  The y take photos in several color channels, from which color photos can be put together to complement the one that NASA has already published.

However, this lookup is only post-processed with regard to lens distortion and not further color-corrected. So the new pictures only give a rough guide to how Perseverance sees his surroundings. Better pictures should follow in the coming days, NASA has already announced another press conference.

Perseverance landed on Mars last Thursday, immediately after arriving on the Red Planet. Although the landing was even more of a challenge for the engineers than with the predecessor Curiosity, it apparently worked flawlessly. First a braking parachute slowed the enormous speed of the vehicle, then the braking rockets of the descent stage slowed the rover to walking speed and deposited it at a point that the rover had selected autonomously. It is located in the Jezero crater, where there was once a pool of water.

During the preparations that have now begun to make the rover ready for mission, NASA has now also received the first data from the small Ingenuity helicopter. Accordingly, both the small helicopter and its base station work as expected and the batteries should now be charged. It should remain connected to the rover for another 30 to 60 days before a first attempt at flight is made, explains NASA.

The n the rover should begin its exploration.

The  US space agency has scheduled another press conference for Monday evening (8 p.m. CET), at which new pictures and a video of Perseverance will be published.

Wave of lawsuits against corona layoffs at the airport

These are the most important people in the tournament

Memories of relegation: VfB versus Union