NASA executive Mike Watkins said, “ The se videos are amazing. We’ve all watched them many, many times over the weekend.” 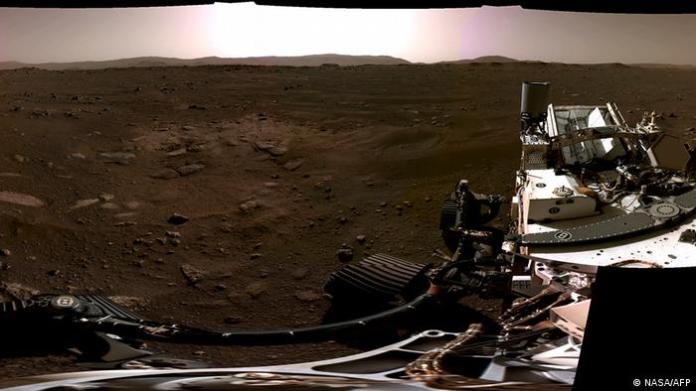 It doesn’t look particularly inviting on Mars, but the scientists are still enthusiastic

The  small “Ingenuity” helicopter on board the rover had previously sent its first status report to the control center in Pasadena, California – and according to NASA experts, it seems to be working perfectly. “Ingenuity” (in German: ingenuity) is still attached to the underside of “Perseverance”. But in 30 to 60 days the helicopter is supposed to explore Mars from a bird’s eye view. It would be the first flight of an aircraft over another planet.

He was en route for more than 470 million kilometers

The  rover “Perseverance”, weighing around 1000 kilograms and the size of a small car, was touched down last week – after 203 days of flight and 472 million kilometers – with a risky maneuver in a dry lake called “Jezero Crater”. “Perseverance” is to investigate this lake with a diameter of around 45 kilometers over the next two years.

The  development and construction of the approximately 2.5 billion dollars (about 2.2 billion euros) rover had taken eight years. He is supposed to search for traces of previous microbial life on the red planet and to research the climate and geology of the planet. “Perseverance” is already the fifth rover to be brought to Mars. All of them were built by the USA, the last one – “Curiosity” – is still in use.

“I’m not a Nazi”: Wendler defends himself after a concentration camp...

JPMorgan: Gold will continue to suffer from the growing popularity of...

Federal Constitutional Court: Local police do not have to tolerate insult