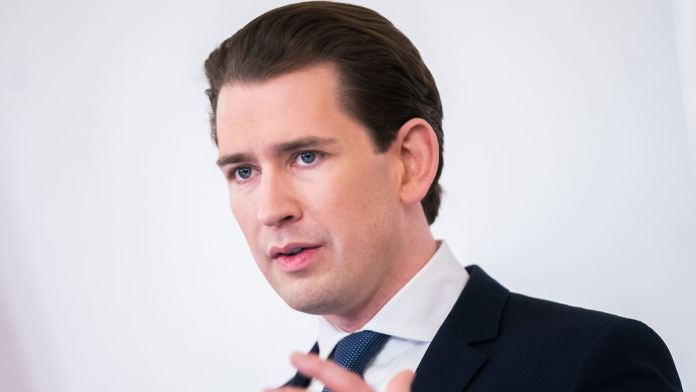 Will the Ibiza investigators soon be knocking on Sebastian Kurz?  The  corruption scandal in Austria is moving ever closer to the Federal Chancellor, who in turn is attacking the judiciary. Even the government partner keeps his distance.
In the summer of 2017, Austria’s largest gaming company, Novomatic, had a problem, an additional tax claim in Italy of millions. So the kind of problem that only the right people can solve, a foreign minister for example. At that time, his name was Sebastian Kurz, to whom Novomatic CEO Harald Neumann had an indirect line through his confidante Gernot Blümel. So Neumann sends an SMS to Blümel: “I need a short appointment with Kurz (first because of a donation and secondly about a problem we have in Italy! (…) lg Harald.”

Around three years later, investigators in Austria’s largest corruption scandal find this and other suspicious SMS messages, continue their search and search the house of Gernot Blümel, who is now Finance Minister, last Thursday. And now Sebastian Kurz also has a problem, namely the kind of problem that could trigger a state crisis: the Chancellor of the Republic of Austria and his party sink dangerously into the corruption swamp of Ibiza.

“Novomatic pays everyone,” FPÖ boss Heinz-Christian Strache said at the time, and now there is suspicion that this also applies to Sebastian Kurz. In an attempt to keep himself harmless, Kurz attacks the judicial authorities, but more and more explosive details seep through – and the coalition partner is noticeably distancing himself.

Whether the meeting between the foreign minister at the time and Novomatic actually came about is only one detail in the corruption investigation, but hotly contested:

The  investigators found an entry “Kurz” in the calendar of Novomatic owner Johann Graf for July 25, 2017. Those involved According to this, there is a mix-up: Martina Kurz, a member of the Novomatic supervisory board and Graf’s daughter-in-law. Both have made appropriate affidavits.

According to the investigation file, from which the SPÖ cited, the investigators knew that the names were identical, but considered an appointment with the daughter-in-law to be implausible – also because the first names are usually noted for appointments with relatives.

Kurz denies both the meeting and any donations and considers himself and his finance minister to be exonerated – even more, the ÖVP sees the “whole house of cards collapsing”, as parliamentary group leader August Wöginger put it, and is counter-attacking the scouts Economic and Corruption Public Prosecutor’s Office on: Kurz spoke of “misconduct” by the WKStA and called for reforms. A public withdrawal of confidence, with which the Federal Chancellor not only turned against the opposition and the professional associations of judges and prosecutors – but also with the Greens his own coalition partner.

The  Greens have their backs at the Ministry of Justice and there the WKStA. “Clean environment, clean politics”, this was the motto under which the Greens went into the election campaign, according to Tomaselli: “We will not look the other way for a second if our partner is involved in corruption. And we will not allow the ÖVP to be one of the mainstays Pillars of Democracy. ”

The  Greens want to use the heated dispute over the judiciary to pound in a few pegs in matters of transparency: Official secrecy should finally fall and a federal prosecutor installed, who is politically independent.

Isn’t Ibiza an island in Austria?

The  Green Nina Tomaselli is also on the Ibiza Committee of Inquiry and interviewed Sebastian Kurz in the summer. “As you know, I was not in Ibiza,” said the Chancellor at the time, a line of defense that he had drawn up immediately after the video appeared when he immediately terminated Heinz-Christian Strache’s coalition with the FPÖ.

The  decisive factor, according to Kurz at the time: “

The  ideas of the abuse of power” that his Vice Chancellor rolled around in the finca, spurred on by Vodka Bull and the alleged millions of the “schoafen” oligarch niece.

At that time, Strache not only indulged in power fantasies, but also a crash course in Austrian realpolitik: media politics with the wallet, donations to party-affiliated associations and bypassing the audit office, state contracts to wealthy patrons – Strache’s boasting has a real core, which in Austria in the country-typical Belittling “Freunderlwirtschaft” means.

Kurz began with the promise to end this system.

The y made politics past the needs of the population and past parliamentary control. ”

The  investigators and the committee have already unearthed some scams, for example in the “Causa Casinos”, in which the FPÖ is said to have pushed one of its supervisory boards through and promised online gaming licenses in return. Beneficiary: Novomatic.

“Novomatic pays everyone” was one of Strache’s most famous sentences on the finca. But does that also apply to Sebastian Kurz?

The  ÖVP has categorically excluded donations from Novomatic. However, in the numerous leaks that are now circulating in the Austrian media, there are indications of an overly close proximity between the party and the scandalous gambling company.

The  “problem in Italy” mentioned in the SMS, which according to the newspaper “Die Presse” involved a back tax payment of 60 million euros, which could be reduced to 20 million euros, was delegated by Blümel to a party friend in the Ministry of Finance – with the words : “Do it for me.” A completely normal service for a large company, Blümel defended himself.

But Novomatic CEO Neumann also turned to Blümel on very personal matters. He reported on his girlfriend’s job search, who had seen Blümel “in the fitness center” before: “Do you think there is a possibility in the health or agriculture ministry?” Blumel’s answer: “You should send me your résumé and I’ll have a look”. Neumann gave advice on personnel issues during the 2017 election campaign when he advised against two lateral entrants on the list: “Sorry for the frank words, but October is too important! LG Harald”.

Again and again Neumann asked Blümel to meet Sebastian Kurz, which gives the impression: Blümel was just a door opener. Actually, at least that is how the “Financial Times” interprets it after reading the 600-page investigation order, the investigators would soon have to knock on the Chancellor’s door, after all, the name Kurz is mentioned much more often than the name Blümel.

The  investigators’ attention also caught an internal message about party donations to the ÖVP.

The  head of the Austrian motorcycle and sports car manufacturer KTM, Stefan Pierer, one of Kurz’s biggest supporters, had promised in the summer of 2017 to double all the campaign donations received.

The  comment of Novomatic boss Neumann: “We have something better planned ;-)”.

Investigators now have to clarify what that could have been amid a heated political atmosphere.

The  pressure the corruption hunters have to deal with became clear last week in the Ibiza committee of inquiry. Christina Jilek testified there, had worked for the Economic and Corruption Prosecutor for 13 years until she was thrown out in the fall.

Why, she said in her opening statement, which did not give the Republic of Austria a good report: “An effective, powerful and swift fight against corruption [ist] system-related not possible. “An independent and complete clarification of the Ibiza proceedings was simply not possible:”

The re are too many interference. “

Bizarre approach in Tanzania: With steam and god against Corona

Together with Israel and Denmark: Vienna forges vaccination alliance outside the EU

A holiday paradise is fenced in

According to police, militia plans to attack the Capitol: US House of Representatives cancels session – politics