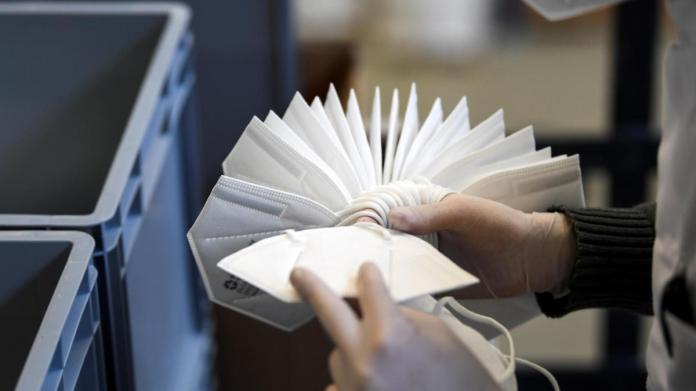 Mor more than a thousand letters have been sent by Stefan Kön in the past weeks and months.

The y went to members of the Bundestag and state politicians, and the entrepreneur even wrote to federal ministers. In it a reproach: “We, like other companies, are not taken into account.”

Kön is the managing director of Technisat, which is best known for its electronics.

The  Rhineland-Palatinate company has also been producing protective medical masks since late summer. For this, Kön even received funding from the Federal Ministry of Economics (BMWi) – the federal government paid 30 percent of the costs for setting up production facilities.

But now Ko is angry. Because that state hardly wants to order from him. “

In fact, states and municipalities apparently still rely heavily on suppliers from the Far East, importers and dealers when it comes to purchasing masks. This was the result of a random analysis of public tenders since October 2020 and a WELT AM SONNTAG survey on the five largest awards among the health ministries of the federal states and the ten most populous German cities.

With a “wire to Asia”

Of the 36 contracts examined, import-export companies were awarded six contracts, and in 19 cases, orders were placed with German dealers, most of whom, according to the product descriptions, obtain the masks from Asia. German manufacturers were supposed to deliver directly only eleven times, with around half of them being attributable to Baden-Württemberg alone.

In November, for example, the Brandenburg Police ordered around 600,000 surgical masks from a Chinese supplier headquartered in Guangzhou.

The  Bavarian State Office for Health and Food Safety bought FFP2 masks for 780,000 euros from a German importer that advertises with its “wire to Asia”.

And just a few days ago, Berliner Wasserbetriebe concluded an order for 100,000 surgical masks with an import-export company with a focus on China, according to public documents.

With Technisat, Kön has so far participated in nine public tenders – two procedures are still ongoing and he has lost seven. He was only commissioned once directly.

The  entrepreneur wants to have identified the reason quickly: his masks are between 20 and 30 cents more expensive than those of the cheap competition from the Far East. Public clients only looked at the price, complains Koen.

The  result: “This is particularly beneficial for importers of cheap goods from Asia.”

Hardly any transparency in procurement

In almost all of the investigated tenders, the costs largely decided which company was awarded the contract. In numerous tenders, only the price is mentioned as a criterion. Most state and local authorities point out, however, that specifications on quality criteria such as certifications have been made and evidence obtained beforehand. In some cases, product samples are also checked beforehand.

But only a few federal states and municipalities want to have a look at the cards when purchasing masks.

The re are not always public tenders, but direct awards. Many keep the names of the contracted companies secret. Some refer to data protection, others want to keep trade secrets.

This includes the city of Dortmund. “

The  naming of the individual contract sums per company is excluded because the publication of this information could harm the legitimate business interests of the company,” explains a spokesman and refers to the corresponding paragraph in the procurement regulation. Similar answers come from the Ministry of Social Affairs in Saxony-Anhalt or the Bavarian State Office for Health and Food Safety.

However, there are positive examples: In addition to Baden-Württemberg, the Berlin district of Friedrichshain-Kreuzberg has only ordered masks from German companies since October. This is what the local pandemic staff decided.

The  Rhineland-Palatinate social welfare office has been ordering from two companies in their own state since October.

And in Hamburg, too, there is a rethinking: To ensure the delivery of high-quality respiratory protection masks, a framework agreement has been concluded with a regional producer for the delivery of FFP2 and FFP3 masks “Made in Germany”, explains a spokesman for the Hamburg judicial authority.

100 million euros for the production

This is exactly the aim of the Federal Ministry of Economics: Germany should be less dependent on cheap competition from the Far East. Peter Altmaier’s (CDU) house is providing a total of 100 million euros through various funding programs to stimulate the manufacture of masks and fleece, the most important preliminary product.

The  German production capacities should be “competitive and sustainable”, declared Altmaier in November.

Technisat boss Kön does not feel any of this.

The  entrepreneur therefore appealed to politicians in his letters.

The y should work to ensure that, in tenders, the cheapest price is determined exclusively from those companies that have invested in mask production in this country.

Yves-Simon Gloy is also not surprised that domestic manufacturers have so far had little chance of receiving tenders. “Lower consumption of resources, energy efficiency, short transport routes and higher environmental standards – all of this hardly plays a role in the award process,” says the textile engineer.

During the first wave, Gloy had founded a company conglomerate that produced masks in Germany. And Jenz Otto, managing director of the Association of the North-East German Textile Industry, demands that not only the purchase price be raised as the measure of all things.

Damage despite Made in Germany?

Germany could not win the price war with Chinese producers. “

The  problem is homemade,” says Otto. Whether high wage and ancillary wage costs, energy prices or the new CO2Levy: It is an illusion to believe that domestic production is only competitive on the free market through price. “Unfortunately, only a few customers are willing to pay more for better quality and sustainable production.”

Baden-Württemberg shows what consequences the low-price policy can have. It is true that the country obtains a large part of the 44 million masks it has procured to date from manufacturers who produce in Germany. According to the Ministry of Social Affairs, proof of quality assurance also decides on supplements.

Nevertheless, there are massive errors in practice: After dozens of tips from schools and homes, the state government decided to subject all masks to an examination by the Dekra.

After this was completed, the ministry initially reported that “not all” of the masks met the standard. Only a research of the “Badische Neuesten Nachrichten” showed the miserable result in its entirety:

The  masks of 13 of the total of 27 manufacturers flew through the test – most of the companies concerned come from China, as an internal letter to the municipal umbrella organizations shows, the WELT AM SUNDAY is available.

The  permeability is sometimes considerably above the norm. In one case it is said to be a counterfeit product.

The  state now hires a law firm to file claims for damages.

Damage from junk masks is unclear

Even more: “It is not possible to determine in what quantities of masks from the affected manufacturers were distributed to the agencies,” says the Ministry of Social Affairs. It is also difficult to determine to what extent the scrap masks caused infections.

However, the Ministry sees a large part of the responsibility with the federal government. Only masks from three of the 13 manufacturers came from state procurement – the rest from the Federal Ministry of Health.

The  authority of Minister Jens Spahn left telephone and written inquiries from WELT AM SONNTAG unanswered until the editorial deadline.

Technisat boss Kön is not satisfied with the reactions to his letters. MPs do not feel responsible, ministries are referred to the states, he says. “It’s like a prank of the bourgeoisie.” After all, companies from the private sector are also among his customers. Nevertheless, Koen wants to keep trying with public clients. “We don’t have another chance,” he says.

This text is from WELT AM SONNTAG. We will be happy to deliver them to your home on a regular basis.

Bob Dylan sells rights to all of his songs to Universal...

Til Schweiger celebrates his birthday with a spicy youth photo Munich: Reactions to the appointment of Sir Simon Rattle – Munich