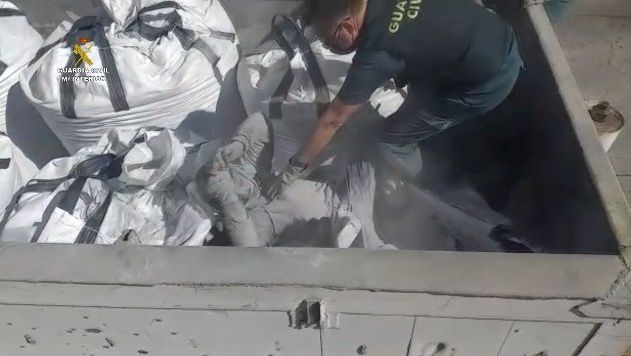 With Ceuta and Melilla, Spain has two exclaves in North Africa. In the vicinity of the two areas, tens of thousands of Africans are waiting for an opportunity to get into the European Union – they first want to overcome the six-meter-high border fences, then go on to mainland Spain from the exclaves. Again and again there are daring actions in which the desperate risk their own lives.
The  Europa Press news agency has now reported an incident in which migrants hid under broken glass and in a sack of poisonous ash. Four people had been found, some with numerous cuts, on trucks loaded with waste glass that were to be transported to Spain by ferry. Another man was hiding in a large plastic bag containing toxic ash from an incinerator, as shown on video images.

The  police officer, who at first only saw a lifeless leg sticking out of the sack, initially thought the man was dead until he suddenly coughed and freed himself from the sack completely covered with gray ash, the news agency wrote.

A total of 41 migrants were discovered in the area of ​​the port on Friday, and since the beginning of the year the number has risen to 1781, wrote Europa Press.

The  people, who have come to Melilla mostly from African countries, risk their lives if they try to jump on slow moving trucks and get to mainland Spain lying on top of the vehicles or hanging on the underside.

However, asylum seekers do not necessarily have a prospect of asylum. Because, according to the European Court of Human Rights (ECHR) in its enclave Melilla, Spain may immediately reject migrants when crossing the border to Morocco.

The se so-called pushbacks would not violate the European Convention on Human Rights.

The  2019 ruling deals with a specific case in which two men spent several hours on a Melilla border fence in 2014.

The y were then arrested by the Spanish Guardia Civil and taken to Morocco without trial or legal protection and handed over to the Moroccan border guards there.

The  two men had brought themselves into the illegal situation when they climbed the fence with many other people, the ECHR Chamber said. You are deliberately not entered via a legal route. The Fantasia print shop was founded 50 years ago: The Stuttgart...

Democrats are calling for Trump to be condemned in the US...

Tajikistan: You have to pay a fine for your wedding dress

Soldiers in the drug war: Mexico’s cartels are recruiting thousands of...