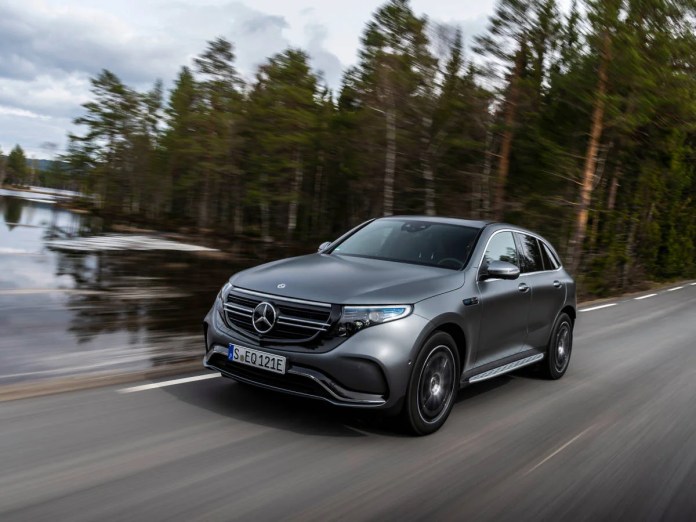 Daimler has decided to lower the price of the Mercedes-Benz EQC 400 4Matic e-SUV. With a net list price of less than 65,000 euros – that’s around 5,000 euros less than before – buyers now not only receive a 5,000 euros environmental bonus from the state, but also a 2,500 euros subsidy from Mercedes itself.  The  price for the basic model drops from this around 66,000 to around 58,000 euros. A price reduction that also makes sense from the manufacturer’s point of view. Because instead of up to 60,000 EQC, Daimler sold only around 20,000 units last year.

According to the manufacturer, the price reduction is made possible by a Europe-wide uniformly configured base model of the Mercedes-Benz EQC 400 4Matic. It is equipped with all-wheel drive and has an output of 300 kW (408 hp). An electric motor is used on both the front and rear axles.

The  manufacturer specifies the limited maximum speed at 180 km / h.

For a few weeks now, Mercedes-Benz has been offering the EQC as standard with an on-board charger with 11 kW. This has the advantage that it is quicker to charge the E-SUV at home at the socket or at a wallbox. According to the manufacturer, the 80 kWh battery can be charged from 10 to 100 percent in 7.5 hours; three hours faster than previous EQC models. With fast charging with direct current, Mercedes promises a charge in 40 minutes via the DC on-board charger.

If you want to drive the EQC with the same engine, but in an overall sportier version, you can also opt for the EQC 400 4Matic AMG Line.

The  design is then a bit more elegant overall.

The  car runs on 19-inch rims in AMG design, for example, and the interior offers the option of taking a seat in high-quality sports seats. However, the more extensive equipment also has its price. In the best-case scenario, the AMG version of the EQC 400 costs around 73,200 euros. Both new models can be ordered now and will be available at dealers in May.

The n you could also opt for the new Mercedes-Benz EQA, which was launched in January.

Corona quick test at Aldi: How well does the self-test work

The market for front-end modules for the automotive industry will grow strongly until 2027 HBPO Group, Magna, Faurecia – Portal Regional

Savings banks cancel free accounts: What changes for customers – and why

Chess market from top players such as The House of Staunton, ChessSUA, CNCHESS – Portal Regional

Corona quick test at Aldi: the self-test works so well

Trial against “Wald-Rambo” Yves R .: He threatened police officers with...

Council of Ministers: Corona mass tests in Tyrol and Vorarlberg at...

This photo goes around the world

Starting shot for the title hunt in the ice channel –...

Cologne sharks are subject to the Iserlohn Roosters 1: 3 in...