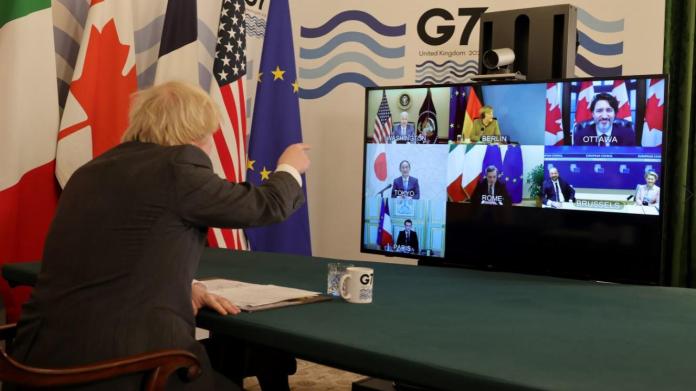 Joe Biden, Emmanuel Macron, Mario Draghi, Yoshihide Suga and Justin Trudeau, all heads of state of the major economic powers, listened carefully to Boris Johnson’s at the G7 video meeting on Friday, only one in between: Angela Merkel. Because suddenly someone was chatting in German and interrupted the British Prime Minister in the middle of a word – and he joked right afterwards: “Can you hear us, Angela? I think you have to mute it.”

The  smile moment – in the video.

G7 summit: suddenly it gets loud in Berlin

Many of us are used to virtual conferences in times of Corona, also that it does not always work smoothly. Sometimes the connection is interrupted, sometimes the picture jerks, sometimes someone forgets to mute their microphone and accidentally interrupts you – like Chancellor Angela Merkel at the G7 video summit.

The  Chancellor is promptly warned in a humorous way by her British counterpart to mute her microphone. That makes the other heads of government smile.

After the minor glitch, the heads of state and government quickly got down to business. After all, the corona pandemic, the global economy and the fair distribution of vaccines are high on the agenda. In their final statement, the G7 leaders underscored their determination to cooperate better again to defeat the pandemic and work for a global economic recovery. Among other things, poorer countries are to be supported in the fight against the pandemic with more than four billion US dollars.

The  federal government is providing funds of 1.5 billion euros. This makes Germany the largest donor – ahead of the USA and Great Britain. Merkel emphasized that “the pandemic will only be defeated when everyone in the world has been vaccinated”.

The  rich countries have now secured two-thirds of the vaccine doses, despite only making up 16 percent of the world’s population. Only 0.5 percent of vaccinations worldwide have so far taken place in the poorest countries.

Frankfurt Airport is ready to distribute the corona vaccines

Gisin on course for medals after Super-G: “I’m back in psycho...

Soccer – Stuttgart – VfB coach on leadership dispute: neither side...

Largest construction project of Caritas: From the green-blue Nesenbach to the... This is how artists get through the crisis

End of gasoline engines? Japan wants to make all car...