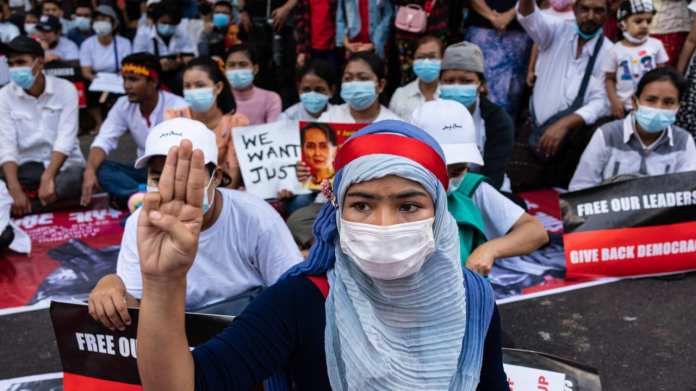 After the coup in Myanmar, the FDP is demanding sanctions against the military junta. In a letter to Foreign Minister Heiko Maas (54, SPD), which BILD has received, nine members of the FDP are calling for “European sanctions to be imposed on the leading generals and companies associated with them”.

“Because Myanmar is an important component of the ASEAN federation, because the population urgently needs economic support and the sales market in the EU, and because democratic developments and the civil society opposition need to be supported, we, the undersigned, are pressing with them Petition our deep concern about the current developments in Myanmar, ”the open letter reads.

If the military junta does not turn back, Myanmar would again face international isolation. Only the democratically elected government should be recognized as the only legitimate representative of the Myanmar state, the federal government must campaign for the release of State Councilor Aung San Suu Kyi and President Win Myint.

Should the military dictatorship persist, the federal government would have to “appeal to the European Commission for a special audit as soon as possible about a partial withdrawal of Myanmar’s EBA privileges and thus restriction of duty-free and quota-free preferential market access, especially for those products that the military leadership is exporting financed “.

Care should be taken to ensure that no product exports are affected that would increase the suffering of the population. In addition, the UN should “set up an international observer mission to precisely record the situation of the Rohingya in Myanmar”.
At a meeting of EU foreign ministers on Monday, the EU threatened restrictive measures and further “tools” would be examined.

On February 1, the military leadership arrested the country’s government and proclaimed a military government. At the same time, the Internet was throttled to keep popular protests under control.

The  military junta reacted to the ongoing demonstrations with sharp weapons, and at least three demonstrators have been killed so far.

The  people in Myanmar deserved a better future than another, dark military dictatorship, Christoph Hoffmann told BILD. “You are now fighting for the prosperity and democracy that you have been able to sniff at over the past few years. Hope now rests on the opposition general strike. “

Frank Müller-Rosentritt, who initiated the letter together with Hoffmann, sees the military coup as “a gateway for China’s efforts to massively expand its influence in the ASEAN region. That is why Europe must now send the signal that we are loyal partners for everyone who works for democracy and human rights ”.

Germany and the EU should not only verbally condemn the actions of the military in Myanmar, said Bijan Djir-Sarai. “

The  federal government must now agree with the other EU states on personal sanctions against the military leadership and implement them immediately.”

Liverpool FC remained without a home defeat for 1269 days –...

Around 120 passengers stay overnight at the airport

Ark 2: Hollywood star Vin Diesel will kill dinosaurs in the...

BMW driver dies after a horror crash on the A5

Damper at the start of the year: Wall Street rescues itself...

Highlights during the Advent season! The clubs ugly Christmas sweaters