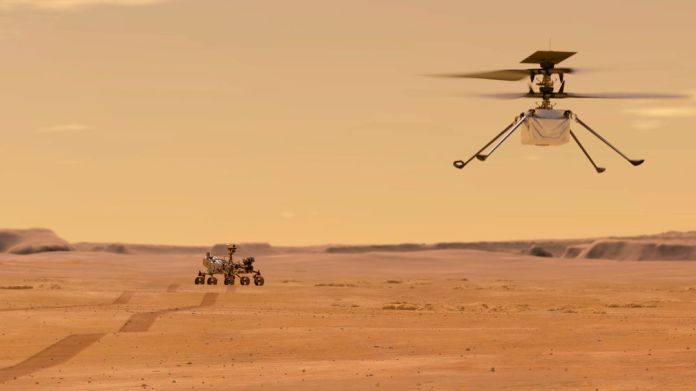 Pasadena.  The  small “Ingenuity” helicopter on board the Mars rover “Perseverance” sent its first status report to the control center in Pasadena, California, on Friday (local time). “Everything seems to be working fine,” said project manager Tim Canham, according to a statement from the US space agency Nasa. Now it is important to quickly charge the six lithium-ion batteries of the aircraft, which weighs around two kilograms, in order to keep the electronics warm.

The  Mars night is cold – minus 90 degrees Celsius

“Ingenuity” (in German: ingenuity) is still attached to the bottom of “Perseverance” (stamina). But in 30 to 60 days the helicopter is supposed to explore Mars from a bird’s eye view. It would be the first flight of an aircraft over another planet. “Ingenuity” will have to withstand extreme conditions: On Mars, it can be as cold as minus 90 degrees Celsius at night.

The  rover “Perseverance”, weighing around 1,000 kilograms and the size of a small car, landed on Thursday – after 203 days of flight and 472 million kilometers traveled – with a risky maneuver in a dry lake called “Jezero Crater”. “Perseverance” will investigate this lake with a diameter of around 45 kilometers over the next two years.

Measuring instruments are to be tested

Apple spoke to Canoo about the takeover

Assault on money messengers at the Park Center Treptow

How Spartan was Sparta really?

Uri and Schwyz loosen the upper limit for religious celebrations

There is a risk of chaos in numbers at the start:...

Navalny accuses Putin of state terrorism after a poison attack