Assistant coach Miroslav Klose from FC Bayern Munich has im kicker talked about the upcoming duel between Robert Lewandowski and Ciro Immobile from Lazio. Also: RB Leipzig teased against FCB. Here you can find all the news and rumors about FC Bayern.

Read the news and rumors from February 21 here.

FCB-Co-Trainer Miroslav Klose hat im kicker talked about the upcoming duel between Robert Lewandowski and Ciro Immobile from Lazio. “I see Lewandowski in training every day, I can judge him more comprehensively. I think he’s better, he’s complete and the measure of all center strikers,” he explained.

But Immobile was also praised by Klose: “Immobile deserves his goals because he works for these scenes. He is a lot against the ball and on the move with the ball in order to be playable. Immobile needs few chances for his goals, which for his quality speaks.”

FC Bayern has therefore been warned of the Champions League game on Tuesday (9 p.m. in the LIVETICKER): “He has a whole package, is both feet and headers.”

With a 4-0 win at Hertha BSC, RB Leipzig shortened the gap to Bayern to two points. “Of course it’s nice that we’re closer again. It was seven points for a long time. I was very impressed by the team’s reaction. That they didn’t give up after we were seven points behind after the Mainz game”, said RBL coach Julian Nagelsmann after the fourth Bundesliga victory of his team in a row.

The  Red Bulls use this to head towards Munich. “It was not to be expected that Bayern would give up five points. Now they have given it up and it’s our turn,” said Marcel Sabitzer Sky. “Now it’s time to be there. But the next few weeks will be tough for us too,” continued Sabitzer: “Sure, we’re playing with the front runners, we are third, fourth and fifth. It’s a duel. It helps nothing to talk about. We have to stick with it week after week. If we don’t succeed, everyone else will laugh at you again. ”

The  direct duel between Bayern and Leipzig will take place on April 3rd.

The  situation at the top of the table

FC Bayern – Hamann: FCB has “burned a lot of money”

Dietmar Hamann has in BR talked about the situation of Bavaria. “

The  coach tries to get through with thirteen or fourteen players, that can’t work,” analyzed Hamann. Especially Marc Roca and Douglas Costa, who came to Bayern in the summer, play “no role” in Hansi Flick’s plans, according to Hamann.

He sees a problem in Bayern’s transfer policy in the coach’s lack of veto right on transfers. “That is not a state of affairs. This is where the sports director and trainer have to get closer and share competencies and decision-making rights,” demanded the present day Sky-Expert. Bayern have won six titles – but also “burned a lot of money”.

Hamann sees an exciting championship fight. “Bayern have lost their will.

The y are currently unable to bring 90 minutes of intense football to the field,” he said.

Big chance for gold: German flying duel is coming up

Bochum new second thanks to Zulj’s stroke of genius – football

Vienna insists on immediate school lessons after the lockdown

NBA: Stephen Curry scores 62: “I love everything this game has... 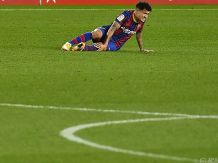 Barcelona coach Koeman: “The championship will be difficult” – Football –