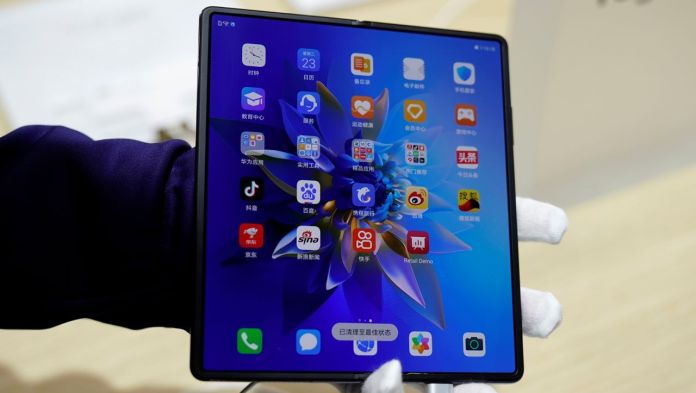 When it comes to the question of how best to build smartphones with a foldable screen, the technology company Huawei has made a backward roll. With its previous folding smartphones, the Mate X and the Mate Xs, the Chinese company had always attached the screen to the outside of the device. This saved the need for an additional display on the outside. At the same time, this increased the risk of damaging the foldable display.
At the Mobile World Congress, which is currently taking place in Shanghai despite the pandemic, the company has now presented a fundamentally changed new version, the Mate X2.  The  sensitive folding screen of this model is now on the inside of the two halves of the housing; the full size of eight inches is only visible when it is opened. On the outside, however, there is a separate display with a screen size of 6.5 inches.

The  design is reminiscent of the construction preferred by Samsung, which Huawei’s Korean competitor last used for the Galaxy Z Fold2 5G.
Both screens are based on OLED technology and have frame rates of 90 Hertz, so they should provide very high image quality. On the back is an arrangement of four cameras with up to 50 megapixel resolution and up to ten times optical zoom. Huawei uses its own Kirin 9000 chip as the processor.

The  company has not had many other options since the US imposed sanctions on it.

Huawei’s Android alternative is to come in April

Because of these sanctions, US companies have not been allowed to supply Huawei with any products developed or manufactured in the USA since mid-2019. In addition to microchips and processors, this also includes Google’s Android operating system and the associated services.

A system based on an open source version of Android 10 is therefore installed on the Mate X2, which lacks important Google offers such as the Play Store, Gmail and YouTube. Huawei is trying to balance these services with its own app shop and a search function for apps in alternative app stores.

During the presentation, however, Huawei announced that it would equip the Mate X2 with its own operating system called HarmonyOS from April, which the company presented as an Android alternative in response to the US sanctions in 2019. Huawei’s head of the entertainment electronics division, Richard Yu, had already told SPIEGEL in September 2019 that HarmonyOS would be used in smartphones such as the P40 from 2020 if the sanctions were not relaxed.

A few weeks ago, however, “Ars Technica” found out in a test that HarmonyOS is ultimately an Android clone, even if the company always claims otherwise.

Anything but a bargain

On the sidelines of the Mobile World Congress, Huawei CEO Ken Hu said that the company was able to increase its sales and profits slightly despite the sanctions. Exact figures on this should not be published until March.

The  new Mate X2 will certainly not play a major role in this. On the one hand, with prices starting at 17,999 yuan, the equivalent of around 2300 euros, it is aimed at a very wealthy clientele. On the other hand, it is offered – at least for the time being – exclusively in China.

RB Leipzig: At Szoboszlai “high probability that he will move to...

Petrol and diesel are more expensive because of the CO2 price

First Dates Vox: Roland Trettl from the role – when ER...

This corona drama in Germany only shows up at second glance