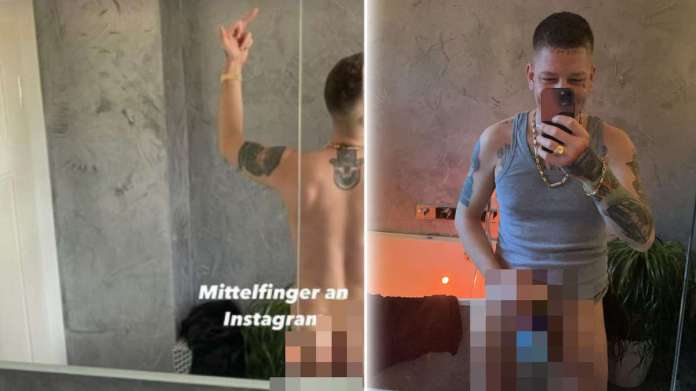 Streamer, provocateur, influencer – MontanaBlack shows itself with a bare bottom on Instagram. But his protest image does not go down well with everyone.

Buxtehude, Germany – According to MontanaBlack  The re is a lack of equality on the social media platform to the detriment of male influencers. To express his harsh criticism, he posted Streamer out Buxtehude again and again even pictures in which he stands shirtless in front of a mirror. But now Marcel Eris wants that Beef miss the last blow and provoke properly – it shows itself blank.

MontanaBlack: Twitch streamer takes on the fight against Instagram – he feels disadvantaged

A few months ago, MontanaBlack began to criticize what he believed to be a lack of equality on Instagram. Again and again the popular Streamer a voice in his mindset and advocated fairness. Above all, the freedom of movement of many women on Instagram was a thorn in Marcel Eris’ side. But despite the harsh criticism against the social media service, he himself posted a photo in which he was standing naked in front of a mirror in the bathroom.

In the photo of MontanaBlack you could see how the 32-year-old was holding a glass cleaner in front of the crotch. According to the Streamer should the huge Instagram platform from Facebook “

The  biggest n *** ens club” be. This was followed by a blocking of his Instagram-Story, but that spread with Streamer out Buxtehude then more salt in the wound. According to Marcel Eris, there are numerous women who do not have any trouble with such content in their posts Instagram get while he is being punished hard.

As an example, he cited a US influencer. About their content he said: “Yes, yes, Instagram blocks my things because of sexual content, but what you saw with the young women is for science. […] Digga where did I end up here.“

The n went MontanaBlack then also to the employees of the social media service: “Which flat pipes work there on Instagram? That’s a really big joke!“

MontanaBlack: Twitch streamer wants to put an end to the beef with Instagram – blank photo in the story

MontanaBlack recently made a clear statement against the social media platform in its Instagram story: “For equality on Instagram“.

The n tried the Streamer posing in front of his mirror with a pretty clear picture. Even before this post, the 32-year-old published a picture from a pool of water, which was then blocked by the social media platform. In response, Marcel Eris wrote in his Instagram-Story: „As a reminder, this image has been banned for sexual content.

Posted on February 13, 2021 MontanaBlack then a new story Instagramwhich made for a lot of discussion. In the picture you can see the 32-year-old Streamer with a raised middle finger and the message that this is “an Instagram“Should direct. In addition, Marcel Eris stretches his bottom into the camera in the photo, which can be seen for over 2.9 million followers. This is completely bare and uncovered – the right step to fight for equality?

The first case in Germany? Man dies after second corona...

When it comes to wearing masks, Germany is a “developing country”

How the SPD could solve all problems in Berlin