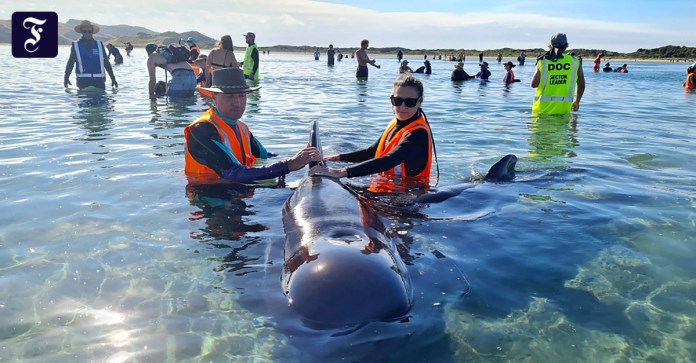 More than 20 pilot whales have been brought back into deeper waters after a second stranding off New Zealand. “ The  whales are currently swimming freely off the coast and are monitored by a boat from the nature conservation authority,” said the organization Project Jonah on Tuesday. On Monday, around 50 animals were stranded on the Farewell Spit headland. Many of them died, but about 28 survived the night.

However, helpers found this group on Tuesday in the same area off the South Island of the Pacific state. Volunteers formed a human chain to drive the whales into deeper water.

The re is a small group that has moved away from the main group, but they can still swim freely, according to a Facebook post from the afternoon.

According to media reports, scientists are trying to find out why such incidents are more common at Farewell Spit. In February 2017, between 600 and 700 whales were stranded there, 250 of them died. Long-finned pilot whales belong to the dolphin family.

The disease progressed very much in identical twins …