States in Asia are obviously more successful in fighting pandemics than the western world. State tracking meets with less resistance than in Germany

The  measures propagated by governments against Corona, such as wearing masks, social distancing and various approaches to lockdown, are encountering increasing resistance in parts of the population. Consistent person tracking, including movement monitoring of people who were prescribed quarantine, was dispensed with with reference to the GDPR and the Corona app was circulated as a blunt sword.

Citizens in Germany are reluctant to disclose their personal data to private companies if they expect an advantage in doing so, even if these advantages, for example with customer cards, quickly turn out to be a mistake, because the customers actually bind themselves to the company with the cards who issue such systems, which are not called customer loyalty programs for nothing. Discounts in some areas can then be offset by higher prices in other segments that are less in the focus of customers.

Even with numerous messenger systems, users usually give up their data without hesitation when they are assured that the communication content they send will be encrypted. However, the fact that it is of commercial value for providers to be able to evaluate the movement profiles of users is often overlooked.

Anyone who believes in anonymity on the Internet has not understood the technology. With the IMEI, every smartphone has a unique number that only applies to this device.

The  abbreviation stands for “International Mobile Equipment Identity”. It consists of a total of 15 digits and is unique for each device worldwide. In addition, when dialing into the cellular network, a mobile device also transmits the so-called IMSI number (International Mobile Subscriber Identity). This number combination comes from the inserted SIM card.

If you use your SIM card in another mobile device, you keep the IMSI number, but then linked to a different IMEI number.

The  IMEI number was originally intended as a unique identifier. However, it can now also be forged. Fake IMEI numbers run the risk of using the same number twice, which can cause inconvenience in connection with investigations into criminal offenses, for example.

The  technology that makes it possible to track the movement of certain smartphones is already available today and is also used by private providers to create user profiles. So far, the state has only known that smartphone data has been used to determine the volume of movement, for example in connection with the influx of winter sports areas, but not for tracking individual identified users. In Germany, distrust of the state outweighs the possible benefits of monitoring quarantine obligations.

In China, the social scoring system, which has already been implemented to varying degrees in different provinces, has now been expanded in some places to include Covid-19 tracking. It was originally initiated to create trust in business relationships, to be able to check the creditworthiness of people and companies and to provide the data required for this, as is the case in Germany, for example, the Schufa.

State control has been common in China for generations and those who oppose it have a good chance of being reminded by the authorities of who is in charge in the country.

The refore state control is accepted. However, the private data collectors that are used with the health passports developed by Alibaba and Tencent are being viewed critically.

Behind the private models is a barcode system that controls freedom of movement on the basis of the expected health risk. Risk values ​​are calculated from the current body temperature of the individual, their past whereabouts and documented encounters with third parties, which are visible on the smartphone as green, yellow and red color codes. Readers at the entrances and exits of buildings are intended to ensure that public space is only accessible with a green code.

Basically, the assessment of government data collection and the resulting monitoring in China is largely contrary to the situation in Germany. Developments in the fight against the corona pandemic in China could show the Chinese approach as the better solution.

In Singapore, the TraceTogether app is a state monitoring tool that enables the executive of the authoritarian city-state to access data and, in particular, to identify the users recorded. Personal data is protected from access by private individuals, but all data is disclosed to the authorities.

In Singapore, it is assumed that the state must have access to the central server in order to consistently isolate all those identified as contact persons. To enforce the quarantine, methods are used that are easier to implement in an authoritarian state.

The  app that is being used in Singapore may be particularly successful in fighting pandemics, but fundamentally contradicts the options of a Central European democracy, where one calls again and again to let the people vote on the anti-corona measures. Singapore’s tracking model, however successful it may be in practice, seems to be extremely unsuitable for Germany.

The  Kingdom of Thailand, which was largely spared the corona pandemic for a long time and has recently mainly been confronted with corona outbreaks that could be traced back to illegal migrant workers from Myanmar, is now using a mandatory app in order to To be able to react quickly to the corona outbreak.

In the provinces of Chanthaburi, Chon Buri, Trat, Rayong and Samut Sakhon that are currently most affected by Covid-19, the use of the “MorChana” app, which is used to determine one’s position, is now mandatory.

The  original statement that anyone who does not use the app in these provinces should go to jail has since been withdrawn. However, foreigners should also be subject to continuous controls in other provinces after it was found that Corona was introduced by foreigners in many cases.

As another app for tracking Covid-19 infections, Thailand has now launched another tracking app, the ThailandPlus app, before the country is required to be reopened to tourists, which tourists have to download on their smartphones before entering the country the movement of those arriving in the country is transmitted to the authorities.

Which solutions for corona monitoring are available for Germany?

The  government of Taiwan, often praised as the democratic counterpart to “mainland China”, is also taking strict measures to contain Corona against Corona. Compliance with quarantine requirements is strictly controlled. Anyone who leaves the house or turns off their phone is automatically reported to the police.

The re are also strict Quaraine controls in the EU.

The  Polish “home quarantine app”, which works with facial recognition technology, asks everyone who is in quarantine to take a selfie at the quarantine location. Anyone who does not comply with this request within 20 minutes must expect a visit from the police.

Neither the European nor the Asian tracking options seem to be suitable for Germany, where even wastewater monitoring for corona traces, in contrast to the situation in neighboring countries, is met with great reservations.

Due to the mistrust that government measures to combat corona is countering in this country, government approaches will either turn out to be an expensive toothless tiger, as in the case of the Corona app, or they will be fought openly, because one feared that due to the temporary restrictions on movement and freedom of assembly loses the presumed last vestiges of democratic freedoms.

As an alternative to long-term lockdowns, there are ultimately only two tracking options left for Germany: Either the authorities responsible for health lend a private unit, for example a foundation, with the tracking tasks and quarantine monitoring, or one chooses a hidden path and leaves it to them Fields of activity for the secret services.
(Christoph Jehle)

Test matches: Ried and Innsbruck separate in a draw – Hartberg... 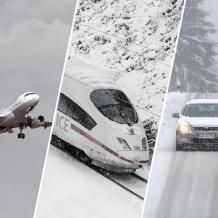 Christmas in the corona crisis: How Berliners can best travel to...

VfB Stuttgart at Borussia Dortmund: How the young wild ones dismantle...