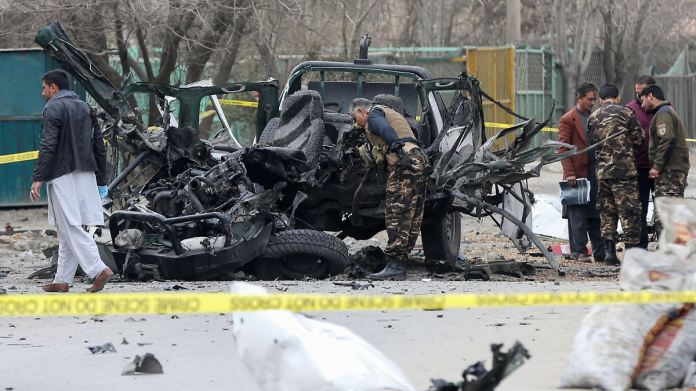 “Mother, get up!”
Video of children appalled after attack

The se are images that shake you: two children, smeared with blood, stand crying next to their mother lying motionless on the floor.

The  video that captures the scene after an attack in Kabul causes horror in Afghanistan. “It has to stop!” Demands a politician.

In Afghanistan, a video of children crying and bleeding at an attack site in Kabul caused horror. According to police, at least two people were killed and five others were injured in the attack, which was apparently directed against Afghan security forces.

The  video, which was recorded immediately after the attack, shows dead bodies lying on the street and two small children, crying over an unconscious woman.

Both children, one of whom is covered in blood, are crying and screaming. One of them calls out: “Mother, get up!”

The  man filming the scene tells the children to calm down as the woman is carried away.

The  video spread in the online networks under the hashtag “Mother stand up”, and many users expressed their horror.

The  Twitter user Edschas Maliksada wrote that the sight of the mother and her children was “unbearable”.

The  politician Fausia Kufi, who is involved in the government’s peace negotiations with the radical Islamic Taliban, asked how the attackers could reconcile the images of the children crying for their mother with their conscience. “This has to stop!” She demanded.

A spokesman for the Kabul police later said the woman from the video was seriously injured in the attack. Her two children were treated for minor injuries. Initially, no one confessed to the attack.

The  Taliban, who regularly attack Afghan security forces, have denied any responsibility.

Despite the peace negotiations between the government and the Taliban, the attacks in Afghanistan had recently increased again. In the past few weeks there have been repeated attacks, especially in Kabul. Politicians, journalists and human rights activists were increasingly targeted by extremists.

The  Afghan authorities always blamed the Taliban for the attacks.

The  Taliban denied the allegations. Some of the attacks were claimed by the Islamic State (IS) jihadist militia.

Corona: So far, around 6000 people in Austria have been vaccinated

Jammed under the snack vending machine: fire brigade in action to...

Cheyenne Ochsenknecht reveals a secret: This is what the father of...

Pushes in Vilbel for the new masks