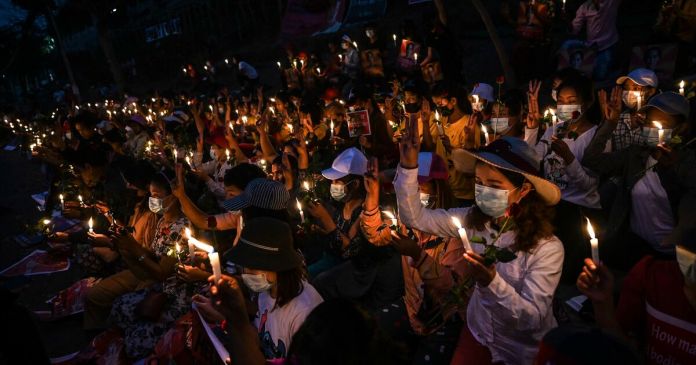 At least two people were shot dead by security forces in the second largest city of Mandalay on Saturday. Another man died that night in Yangon’s largest city. UN Secretary General António Guterres condemned the violence, which despite the fact that thousands of people took to the streets across the country on Sunday.

Security forces in Mandalay fired live ammunition on Saturday at demonstrators who had gathered for a rally at a shipyard. At least 30 people were injured. According to the rescue workers, among the fatalities was a young person who was shot in the head.

Hundreds of police officers and soldiers were deployed at the Yadanarbon shipyard in Mandalay. Protesters yelled at the police to get out.  The  security forces then fired live ammunition.

Guterres condemned the use of “deadly force” against the Mandalay crowd. “

The  use of lethal force, intimidation and harassment against peaceful protesters is unacceptable,” he wrote on Twitter. On behalf of the EU, its foreign representative, Josep Borrell, called for an immediate end to the “violence against civilians demonstrating peacefully”. At a meeting of the EU foreign ministers on Monday, the current developments should be discussed and “appropriate decisions” made, he announced on Twitter.

The  state media in Myanmar did not address the dead. “Some” protesters were injured by security forces, the newspaper “Global New Light of Myanmar” only reported.

In a separate incident on Saturday, a 30-year-old man was killed while patrolling the neighborhood in Yangon as part of an initiative aimed at preventing the nightly arrests of activists. His sister-in-law said he was shot by police. According to the security forces, 20 people attacked a vehicle while officers tried to take an injured man to the hospital.

Thousands pay their respects to the dead

As dusk fell in downtown Yangon, Monywa and Myitkyina, chants and prayers rang out to commemorate the protesters who were killed. Thousands of Mya Thwate Thwate Khaing, who died on Friday, paid their last respects in the capital Naypyidaw. Doctors had fought for ten days for the life of the 20-year-old who was hit by a bullet in the head during protests.

At a ceremony, cars and mopeds drove after the young woman’s coffin, which was laid out on a cart. People held up pictures of the dead and showed the three-finger salute that has become a symbol of the protest against the military junta.

Riot after military coup in Myanmar

Large parts of the population are still marked by the times of the previous military rule, which has lasted almost 50 years since the country’s independence in 1948. Nevertheless, the calls for civil disobedience are currently continuing, and people from all walks of life are taking part in the protests.

One week since the vaccination started – where it jerks and...

One provider beats all others

Jens Spahn is irritated by the early start of vaccination in...

Pietro Lombardi has Corona – that’s how he is now –...

Viennese can register for corona vaccination