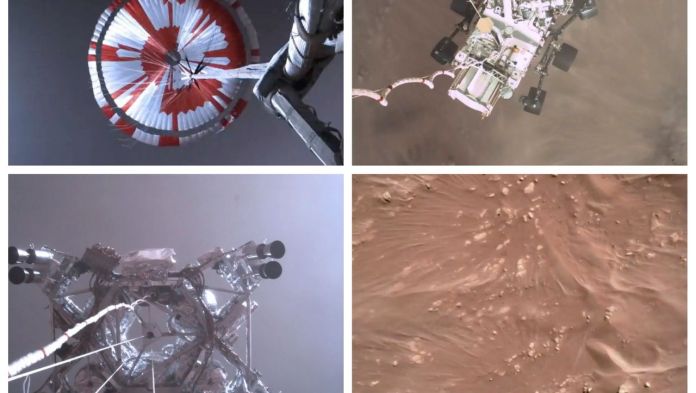 The  US space agency Nasa has published a spectacular video of the landing of the “Perseverance” rover on Mars – and for the first time also sounds from the red planet.

The  video, which lasts more than three minutes, shows how the landing screen opens, the heat shield is repelled and the reddish surface of Mars comes closer and closer.

The n the recordings of several cameras show how the rover is roped down from the landing module floating in the air, while dust is thrown up. NASA also published a sound recording made by Perseverance on Monday. You can hear wind noise. It is the first sound recording from the Red Planet.

The  video recordings of the landing are also a premiere. “

The se are really incredible videos,” said NASA representative Michael Watkins. “This is the first time we’ve been able to capture an event like the landing on Mars like this.”

The  rover, which was launched from Earth in July, will spend several years searching for traces of previous microbial life on Mars.

The  rover, which weighs around a ton and is the size of an SUV, has a two-meter long robotic arm as well as 19 cameras and two microphones. In addition, “Perseverance” is bringing the ultra-light mini-helicopter “Ingenuity” to Mars, which will be the first aircraft to fly on a foreign planet.

The  drone has now sent its first status report to the control center in Pasadena, California – and according to NASA experts, it appears to be “working perfectly”. “Ingenuity” is still attached to the underside of “Perseverance”. But in 30 to 60 days the helicopter is supposed to explore Mars from a bird’s eye view.

“Perseverance” is the fifth rover to be brought to Mars. All of them were built by the USA, the last one so far – »Curiosity« – is still in use. Overall, less than half of all Mars missions launched worldwide have so far been successful.

“The bump is bigger”: cancer patient Philipp gives an update

Top Air at Stuttgart Airport: One of the best bars in...

Corona survey: Many Berlin companies are already writing off in 2021...

Investment and (construction) loans: What savers and builders need to know