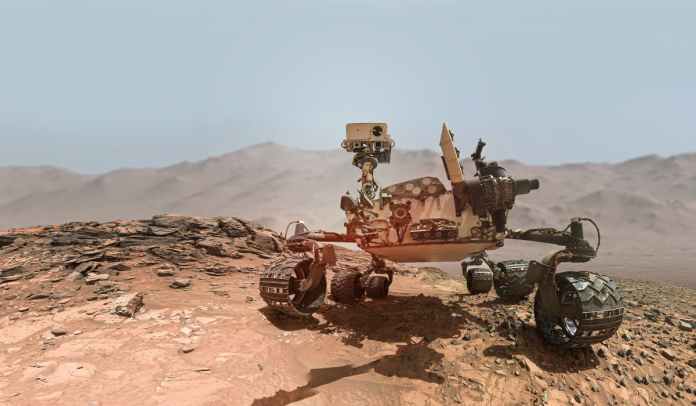 This time for real: After a fake with alleged image and sound recordings of the Mars rover Perserverance circulated over the weekend, NASA has now published a real video of the vehicle landing.

On February 18, the Perseverance rover and its Ingenuity companion helicopter landed on Mars. After immediately starting work, the vehicle is constantly sending data back to Earth. Including panoramic photos of the immediate surroundings, but also video recordings of the landing maneuver.

On Monday, February 22nd, NASA published a high-resolution video showing the direct approach and landing of the rover Perseverance on Mars. In addition, NASA made sound recordings available on February 20, on which you can clearly hear the strong winds, which can be seen in the video through dust swirls.

The  video begins about eleven kilometers above the surface of Mars; the parachute is just opening and slowing down Perserverance from 450 meters per second. Gradually, the heat shield and other parts that are no longer needed are thrown off until the Skycrane maneuver begins.

The  rover is set down safely on the surface of Mars using a kind of hovering crane. Shortly before landing, about 20 meters above the ground, the sand drifts from the Martian winds become visible – and then the rover touches down safely. In the NASA control center, the engineers break out into shouts of joy.

Mars: What the Perseverance rover and its helper-drone Ingenuity will do in the next few months

Overall, the recordings come from five different cameras that were installed at three points on the landing unit. Incidentally, these are by no means specially designed and manufactured devices – Nasa does not name any brands or manufacturers, but does state that they are commercially available. This also applies to the microphone attached to the rover. It could not make any usable recordings during the landing, but survived everything unscathed and is responsible for the sound recordings that NASA was able to make in the Jezero crater two days later.

Fake shots are shared millions of times on Twitter

Shortly after the landing, a nearly 25-second video was circulating on Twitter, which was supposed to show how Perseverance was filming its surroundings; sound recordings can also be heard.

The  video actually shows Mars – but it is older and comes from Perseverance’s predecessor Curiosity.

The  lettering of the rover is also briefly recognizable at the very end of the recordings. However, Curiosity is not equipped with microphones; So where the sound comes from is unclear.

You have to see these memes about Perseverance landing on Mars

If you want to be on the safe side and not wear fakes, you should Perseverance simply directly on Twitter consequences. Percy, as the engineers at NASA affectionately call him, regularly tweeted new recordings and interesting information about the project. By the way, he lists his hobbies in the profile description as “photography, collecting stones, driving around in the field”.

ElringKlinger share: back into the SDAX with hydrogen hype | ... Health – Frankfurt am Main – Search for Covid drugs so...