In animal experiments with ferrets, a nasal spray safely prevented infection with the coronavirus – also with the new virus variants from Great Britain and South Africa.

New York – Can it be that easy? A research team from New York’s Columbia University and Erasmus University Rotterdam has developed a nasal spray that safely protected ferrets from infection with Sars-CoV-2. As the “Medical Xpress” reports, it should also be effective against the British and South African variants of the virus.

Protection against corona with nasal spray: simple solution with lipopeptide?

The  study was published in the journal “Science”.

The  crucial component of the spray is a lipopeptide developed by Matteo Porotto and Anne Moscona, directors of the Center for Host-Pathogen Interaction at Columbia University. It is said to prevent the coronavirus from entering cells. This lipopeptide is said to be cheap to produce and has a long shelf life, and it doesn’t have to be stored in a cool place.

Ferrets are often used for experiments related to respiratory diseases because their lungs are similar to humans and they are very susceptible to Sars-CoV-2 infections. Porotto and Moscona had previously worked on similar lipopeptides – against measles and nipah viruses, among others. However, it was difficult to bring them into clinical trials because these diseases mainly affect people in poor countries. Now this preparatory work could pay off.

In a 3-D model of the human lungs, the lipopeptide prevented the virus from penetrating, but showed no toxicity for human cells, according to the Medical Xpress report.

The  lipopeptide is supposed to achieve its effect by preventing the virus from attaching to the human cell membrane – a process necessary for the pathogen to penetrate. Before Sars-CoV-2 can even dock, it has to develop its spike protein.

The  lipopeptide is now supposed to “sit” in this region and prevent the spike protein from adopting the necessary shape for fusion with the human cell.

That worked well with the ferrets. After 24 hours of intensive direct contact with infected animals in the cage, not a single one of the treated ferrets was said to have become infected, while all animals from the control group – i.e. animals that were not protected by the lipopeptide – took on a massive viral load. (Pamela Dörhöfer)

The re are only a few drugs to prevent severe disease progression after infection with the coronavirus. British researchers are now using an asthma spray in the fight against corona.

Melody Haase presents the result of her buttocks operation so sexy

FFP2 masks: This is how drugstores and pharmacies are set up...

Buy PS5 with contract from O2: Secure your console thanks to...

Lobbyist for Wirecard: The return of Dr. Guttenberg 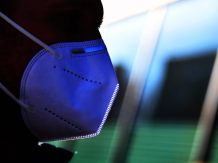