Mike Halmo and Marco Insam not only ricocheted off the KAC defense in this scene. © Kuess

For the first time this season, HCB Südtirol Alperia did not win a point in a duel with Klagenfurt AC. After the defeat in the top game, the Foxes have to share the lead in the standings with the Red Jackets.

The  KAC deservedly won the summit 4-2 and inflicted their first defeat on HC Bozen in the second round. In the Klagenfurt city hall, the Foxes did not manage to play their usual powerful game and showed nerves again and again in the many heated moments.

Dan Catenacci, who knocked Stefan Geier to the ground with a cross check after a push and consequently received a match penalty, serves as an example of Bolzano’s indiscipline. This was doubly annoying, as the South Tyroleans had already arrived decimated due to the failures of Youds, Stollery and Bardaro and they had made it to 1: 2 just a few minutes before Catenacci’s dropout. Even the otherwise very strong Mike Halmo let himself be carried away to a reaction foul in the final phase and received a 2 + 2-minute penalty.

When added up, the Foxes had a whopping 33 penalty minutes on the notepads, while the Klagenfurters only had their 8. Consequently, the Austrian record champions not only had the better shot ratio with 31:22, but also significantly more shares of the game.

The  guests, however, acted too harmlessly over long distances. 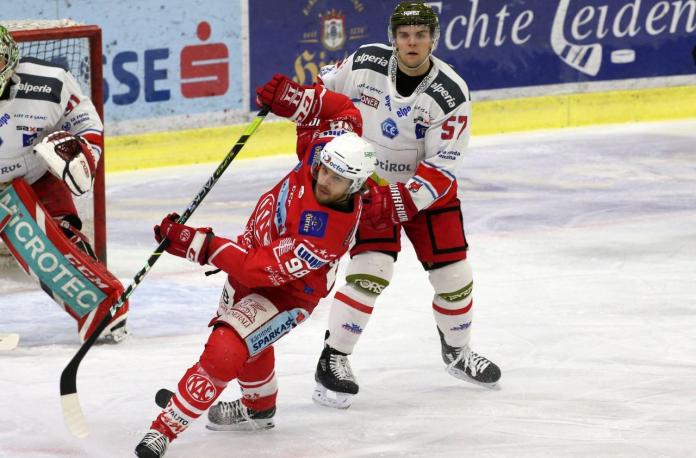 Daniel Obersteiner and the KAC rarely lost their stability against Bozen. © Kuess

It was due to Bozen’s exceptional North American talent that they even managed to score a point until shortly before the end. After Clemens Unterweger had a concealed shot and Lukas Haudum outnumbered them to 2-0 using the Onetimer, Halmo shortened to 1: 2 in a remarkable way.

The  Canadian faked a degree several times before he finally pushed the disc precisely into the Kreuzeck. Anton Bernard skilfully took the view of KAC goalie Sebastian Dahm in this scene.

After Steven Strong had restored the Carinthian two-goal lead, it was Brett Findlay who caused tension again in the closing stages. He was there after a turmoil in the slot and scored to 2: 3. In the final minutes of the game, HCB coach Greg Ireland took goalkeeper Leland Irving off the ice for a sixth outfield player. But instead of the equalizer, the decision was made: Rok Ticar scored the 4: 2 with an empty net hit.

With the victory in the top game, the KAC draws level with HC Bozen at the top of the table. However, the Bolzano team already have the chance to take sole command again in their home game against Fehervar on Friday.

The  other games and the live table:

Recommended smartphones for less than 500 euros

Dead in a pile-up in Texas

Iglo and Appel Feinkost: Fight for the captain

How the AfD changed the culture of debate in the Stuttgart...

Will the breakthrough in the Brexit drama come? – Johnson...