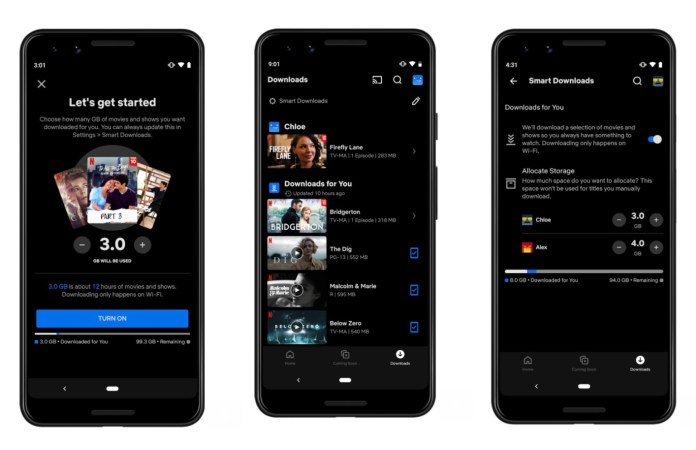 An interesting function has been added to the Smart Downloads. Let’s hope Netflix knows you well enough.

One reason why I pay a lot of money a month for my mobile phone contract is that I have absolutely no desire to worry about what content I would like to download to my smartphone in advance so that I can consume it offline later.

I can rarely decide what I actually want to eat right now – a decision about my entertainment desire in the next few hours (e.g. during a long train ride) is just one step too far. Well, I can’t always rely on the mobile network in Germany during a train ride. But to download episodes or films from Netflix, that’s still going to happen! (I am eagerly waiting for the random button, with which I no longer have to think at all.)

The  random button for Netflix is ​​coming this year

Netflix startet die „Downloads for You“

To get to the actual topic: Netflix is ​​expanding its feature called “Smart Downloads” and thus making the decision for you completely.

The  streaming provider apparently has great confidence in its algorithm. Based on your taste, content should be downloaded automatically in the background with an active WiFi connection and prepared for offline consumption. You only have to decide how much storage space you want to allocate for this project: 1, 3 or 5 GB.

“We are excited to introduce Downloads for You. Anyone who opts for this new feature will have series or films automatically downloaded onto their device with recommendations based on their taste, ”said Patrick Flemming, Director of Product Innovation at Netflix, in a statement. “We want to make it even easier to discover the next new favorite series or movie, whether you are connected or not.”

In principle, the entire catalog should be available for this feature, so it is not limited to Netflix originals. According to TechCrunch, however, some titles are licensed for downloading. For the time being, the function will only be offered in the Android app, but later it will also be enabled on iOS.

Netflix is ​​already downloading the next episode for you on Android

Netflix: Smart Downloads has long been part of the app

Incidentally, the Smart Downloads are not replaced, but expanded. So far, for example, Netflix has been able to automatically delete episodes that have already been viewed to free up storage space, or to download the next episode in advance when you’re done with the last one available offline.

Trial in Frankfurt: He doesn’t want to know anything about stalking

Accidents – Frankfurt am Main – Young people captured by the...

Goiginger extended at LASK – Gladbach change 2019 failed due to...

EU – Berlin – Criticism of Britain’s exit from the Erasmus...

PS5 sold out everywhere? This dealer guarantees delivery in 3...