In Poland, dozens of television and radio stations, newspapers and internet media have suspended their offers in protest against a new advertising tax.  The y fear that Poland, like Hungary, wants to ignore critical voices.

Those who wanted to find out about the state of affairs as usual from non-governmental Polish media today did not find the usual offer on the Internet, for example, but banners on their own behalf: “Your favorite website should appear here,” it said, but it had to be Signs are set. “Protest of the free media” appeared elsewhere instead of the usual. TV stations also switched off their programs, radio stations broadcast information on the day of the protest in an endless loop.

The  reason for the campaign is an advertising tax planned by the Polish government, which ostensibly aims to skim off the profits of the major Internet giants such as Google. But the advertising sales of traditional media would also be affected, depending on their size and activity.

Almost 50 media of different colors signed a protest letter against it.

The  new tax will weaken companies and threaten the very existence of some. And the corona pandemic is used as a pretext to create pressures that would far outlast it.

“That should be your favorite program” – this is how many media protested against the government’s plans in Warsaw.

Government spokesman Piotr Müller on the public broadcaster TVP, who did not take part in the action of the other media, underlined the tax revenue in part to benefit health care: “Other countries have already introduced the tax, such as France and Belgium, and unfortunately it is often the case the internet giants avoid paying them. ”

The  tax should be between two and 15 percent, depending on the company’s earnings and the type of advertising,” said Müller. “

The se funds are intended to benefit the health system and cultural monuments. It is a solidarity tax, as it is in many EU countries.”

According to current plans, around a third of the tax revenue is to flow into a new type of media and culture fund, which among other things will benefit the promotion of national heritage in the media – critics fear that this is primarily the promotion of government-related media.

It is already noticeable that advertising orders from state companies are primarily awarded to related newspapers or portals. In any case, the government supports the national broadcaster TVP with billions in tax revenue. Conversely, however, there is now a risk of billions for private, non-governmental media, they say.

Hungary as a model

The  US company Discovery, which operates the influential private broadcaster TVN in Poland, called the tax plans an attempt to burden the media in order to restrict plurality and freedom of expression.

Boguslaw Chrabota from the newspaper “Rzeczpospolita” said: “That will not serve Polish democracy. Poland has a modern, well-tested media market, it has to be supported, not suppressed. I do not understand this government, which is so much about freedom and patriotism speaks, and then makes such decisions. ”

And Agnieszka Burzynska from the Boulvardblat “Fakt” said on the station “Nowy Siwat”, a radio project that journalists who were dismissed when the PiS Party came to power on public radio: “In truth, the Hungarian model was the godfather. Viktor Orban also has war on the giants like Google. He wielded the saber, but of course he didn’t defeat a giant, he finished off the free media and subordinated them. That’s what it’s all about. ”

Media with foreign participation have a hard time

The  PiS party has long thrown the gauntlet down to “German” media in particular: newspapers such as the picture clone “Fakt”, a subsidiary of Springer Verlag. Media in foreign, especially German hands, would deprive Poland of a large part of their sovereignty, PiS boss Jaroslaw Kaczynki recently emphasized. In contrast, he celebrated the purchase of the regional newspaper group “Polska Press” by the state-controlled oil company PKN Orlen as “the best news for many years”.

The  CEO of PKN Orlen is a long-time companion of Kaczynski, who made a quick career in administration and state-owned companies after the PiS party won the 2015 election. Investigations against him for possible economic crimes had previously been discontinued.

Anschober wants to keep new infections below 1,000 in January

British threaten with naval use: London wants to take action against...

Bitcoin price cracks USD 25,000 – these are the reasons

Gurkerl.at is the new tenant in Tech Park Vienna 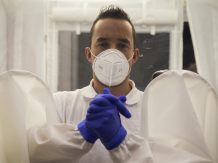