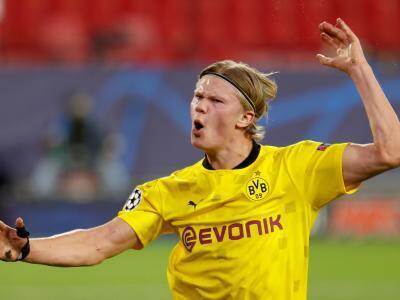 Draghi before the second vote of confidence

Seville (AP) – Edin Terzic looked like relieved of heavy loads. After his team’s 3-2 (3-1) coup in the first leg of the Champions League first leg at Sevilla FC, Borussia Dortmund’s last long-suffering interim coach finally had reason to be happy again.

As he had hoped, BVB, who had recently been in poor shape, finally played the football that it actually stands for. «Those were no easy days, no easy weeks. But today we offered an outstanding team performance and we can be proud of it, ”commented the 38-year-old.

Unlike in the domestic league, in which the Revierclub now has to be content with sixth place, the team convinced with a lot of passion and great determination.

The  splendid first half in particular was reminiscent of the great Champions League evenings of the past. Thanks to the goals of Mahmoud Dahoud (19th) and Erling Haaland (27/43), the first quarter-finals since 2017 before the second leg on March 9 in Dortmund seem within reach. «That feels very, very good. We are happy that we were able to put an exclamation point here, ”enthused captain Marco Reus.

Should Borussia really succeed in making it into the illustrious circle of the best eight European teams, Haaland would have played a major role. After all, the Norwegian was in great shape in Seville and with his seven and eight goals of the season in the premier class set the signs of victory. His impressive total of 18 goals in his first 13 Champions League games is unmatched and should arouse further desires from top clubs. “Edin talked to me a lot. He said it would be my game and I would get my chances. I used that. It was an important win, ”said Haaland.

Terzic referred to the great unity of the team, but gave Haaland special praise: “

The  way he scores is amazing. But the way he put himself at the service of the team today is what we need, ”he said, referring to the goal-scorer’s tireless efforts.

The  fact that Mahmoud Dahoud, who was called into the starting line-up for the first time since December, made the Dortmund team perfect. “

The  whole team didn’t hang their heads this time,” commented the midfielder, referring to the early goal against Suso (7th).

Even the late second goal of the opponent by Luuk de Jong (84th) could only reduce Dortmund’s joy to a limited extent. “That was annoying, but it outweighs the positives. We are very happy about the good starting position we have put ourselves in with this game, ”said Terzic.

Doctors admonish: Relaxation only in less than 1000 intensive care patients Statement game! Brady has the answer to all questions

Formula 1 in the live ticker: Vettel fiasco in Bahrain! ...