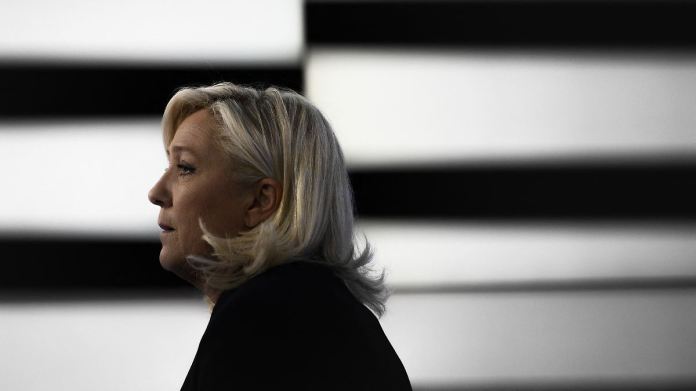 French society is polarized. Corona crisis and Islamism debate give an old friend a new impetus: Marine Le Pen.  The  far-right politician is already dreaming of the presidential palace. Many fear another duel with President Macron.
“When I am President of the Republic” – Marine Le Pen now easily crosses the line. Against the background of the Corona crisis with its severe economic and social consequences, France’s right-wing populist sees her chances of conquering the Elysée Palace increase. Elections will take place in 14 months. And the head of the right wing party Rassemblement National (RN / formerly: Front National) is already a candidate.

After her severe defeat against Emmanuel Macron in the election almost four years ago, the 52-year-old shied away from exchanging blows with political opponents. This reluctance is now over. On Thursday evening she discussed a new law against radical Islamism with Interior Minister Gérald Darmanin on the TV channel France 2.

The  exchange of blows with the powerful head of department was tough, but did not degenerate into a mud fight.

The  race has started

Government spokesman Gabriel Attal spoke of a “moment of truth” even before the debate. Some say the race for the presidential job has begun.

The re is indeed a lot of movement in political camps, but much remains behind the scenes.

The  former whiz kid is not yet an official candidate for the election. It is assumed, however, that the former investment banker will run again, especially since his ambitious reform agenda is far from over due to the many crises. Hardly anyone in Paris expects the pension reform, a prestigious Macron project, to be completed by the next election.

Many expect – and fear – a new edition of the duel between Macron and Le Pen.

The  chairman of the conservative Les Républicains, Christian Jacob, was already mocking that the two top politicians were preparing for a duel, but basically dancing as a duo. “Emmanuel Macron is convinced that the negative attitude towards Marine Le Pen will bring him victory,” said Jacob in the newspaper “Le Figaro”.

The  trained lawyer Le Pen could even take the lead in the first election round before Macron and thus take a pole position for the decisive final round – this was the result of a recently published survey by the Harris Interactive Institute. With a view to the expected final Le Pen-Macron, speculation is circulating as to what this time it could be very close. Four years ago, Macron, a friend of Europe, defeated his opponent with a majority of over 66 percent. Le Pen is already of the opinion that the assumption of their victory is plausible.

Other political stars do not remain idle.

The  angular ex-minister Xavier Bertrand, who has his roots in civil rights, is getting good poll ratings and is in the starting blocks.

The  re-elected Paris Mayor Anne Hidalgo from the Socialists no longer hides her ambitions for national politics. And for the Greens, who had surprisingly performed well with allies in the local elections last year and captured several large town halls in the country, MEP Yannick Jadot could enter the race.

In the hot phase there should be surprises again that nobody can calculate. In 2017, the promising conservative candidate François Fillon missed the second round because of an affair about bogus employment.

The  race for power was ultimately won by Macron – as a newcomer and an outsider. He had come out of nowhere.

Sick after the illness: The long-term corona consequences are so common