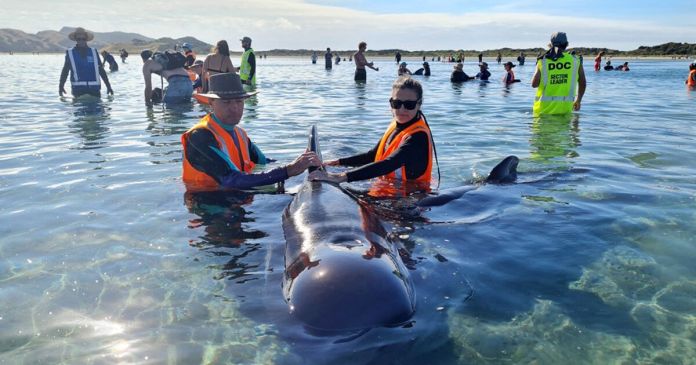 Around 50 pilot whales are stranded on the coast of New Zealand. More than 60 helpers fought for the survival of the animals on Monday, as the authority responsible for nature conservation DOC announced.

The  49 marine mammals were discovered Monday morning on the Farewell Spit headland in the far north of the South Island. Nine of them died by the afternoon.

The  helpers tried to keep the remaining whales alive until the high tide by keeping them cool and wet.

At the Farewell Spit headland, which is around 90 kilometers west of the tourist town of Nelson, there have been at least ten mass strandings in the past 15 years. Most recently, almost 700 whales stranded there in February 2017, 250 of which died.

Scientists are puzzling why such fatal incidents keep coming back on the headland. According to one theory, it could be because the water at this point is particularly shallow, which disrupts the animals’ bion sound.

Cyberpunk 2077 – the catastrophic state was no secret, according to...

Sexism debate in Japan is coming to a head