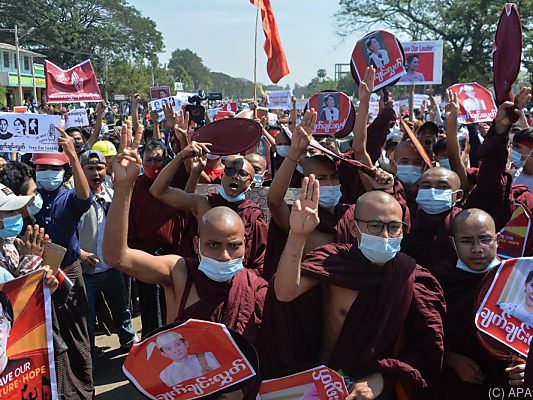 Two weeks after the coup in Myanmar, the military flexed its muscles on Sunday and terrified the population. Since that evening, there were numerous tanks on the streets of the largest city, Yangon. Shots had previously been fired at a rally in the north of the country. Many citizens expected arrests and violence. In the past, the military had brutally put down any resistance.

On the night of Monday (local time), the Internet in the Southeast Asian country was also paralyzed, as reported by the organization Netblocks, which documents Internet blocks worldwide. “We do not know what will happen to us in the next few hours if the Internet connection is interrupted,” wrote a user on Twitter shortly before the shutdown. “Please pray for us!”

Previously, tens of thousands of demonstrators took to the streets across the country on Sunday and demanded the reinstatement of the government under the disempowered Prime Minister Aung San Suu Kyi.

The  75-year-old was taken into custody with numerous other politicians during the coup on the night of February 1.

The  junta then imposed a one-year state of emergency and appointed a new cabinet.

In Myitkyina in the north of the country, security forces reportedly fired at participants in a rally against the military coup that evening. Videos shared on Twitter showed people scattering in panic. According to reports, there could also have been deaths and injuries. Whether it was live ammunition or rubber bullets was initially unclear.

Local journalist Mratt Kyaw Thu and other observers reported that several journalists filming the army’s operations were arrested. Many users desperately called on the international community on social networks to help Myanmar.

Around a dozen ambassadors in the country, including from Germany, France, the Netherlands, Great Britain and the USA, issued a statement calling on the military not to use force against demonstrators who “protest against the overthrow of their legitimate government”.

The  diplomats also strongly condemned the arrest of numerous politicians and activists and the blocking of the Internet and other means of communication. “We support the people of Myanmar in their pursuit of democracy, freedom, peace and prosperity.”

A crowd gathered in front of the US embassy in Rangoon at the weekend to support Washington’s tough stance against the coup plotters. President Joe Biden announced sanctions against leading generals and their affiliates in the White House on Wednesday.

Trial in Stuttgart: Diesel model case by investors against Daimler is...

After the clubhouse success, Facebook is planning its own audio network

AirPods Max for 600 euros: the price is no surprise

“The Geissens” (RTL2): Robert angry about Shania’s visit to the hairdresser:...