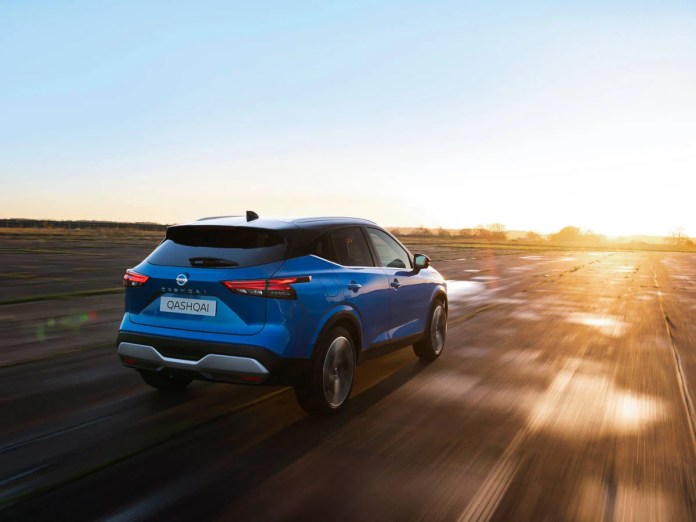 Nissan has introduced a new generation of the Qashqai SUV crossover model. In addition to a version with a simple mild hybrid drive, a model with so-called e-Power technology is also coming to Europe for the first time. It combines a 140 kW (190 PS) electric motor with a petrol engine with an output of 115 kW (156 PS).  The  special thing about it: the 1.5-liter petrol engine only drives a power generator to charge the battery. It is, so to speak, a range extender. However, only the electric motor is responsible for driving the wheels.

Nissan Qashqai with e-Power – what is it actually?

According to the manufacturer, this means that the gasoline engine can always run in its optimal speed range. And that has advantages in terms of fuel consumption and CO2 emissions compared to conventional combustion engines.

The  e-Power technology is, so to speak, a bridge technology from the combustion engine to the pure electric drive.

The  linear acceleration with immediate torque development familiar from e-cars can also be experienced with the e-Power system. At its peak, the new Nissan Qashqai e-Power has a torque of 330 Nm. For comparison: the three likewise new mild hybrid versions only achieve 240 to 270 Nm.

Nissan’s e-Power system has three driving modes: Standard, Sport and Eco. In the standard mode, among other things, an electric motor recuperation is used, which is comparable to the engine brake of a conventional gasoline engine. In sport mode, the main improvement is acceleration, while in eco mode it is primarily fuel that can be saved. In all three modes, the B-mode can also be activated, which increases energy recovery (recuperation) and decelerates the vehicle particularly efficiently without using the brake pedal.

Nissan’s e-Power system was first introduced in Japan in the Note and Serena models. And quite successfully. More than 70 percent of Note sales and almost half of Serena sales come from this drive, according to Nissan. By the way, it is characterized by the fact that “one-pedal driving” is possible.

The  driver starts, accelerates, brakes, stops and holds the vehicle with one and the same pedal.

Important: Nissan’s e-Power system is Not chargeable with a plug. Contrary to what one might initially assume, it is not a plug-in hybrid drive. You fill up the car as usual with classic fuel (or in the future with e-fuel), even if it is powered by an electric motor.

Compared to the previous two generations of Nissan Qashqai, the 2021 model has sharper lines and more pronounced shapes. In addition, Nissan has given the small SUV a larger wheelbase (plus 20 millimeters) and, for the first time in the series, 20-inch tires. Overall, the new Qashqai is 35 millimeters longer and 32 millimeters wider. According to the manufacturer, the height has increased by 25 millimeters, which should provide more space in the interior. In total, the new Qashqai is around 4.4 meters long, 1.8 meters wide and 1.6 meters high.

The  new versions of the third generation of the compact SUV are expected to be available from dealers in the coming spring. Nissan has not yet revealed prices.

The  current generation is still available in the form of special models at prices starting at just under 27,000 euros.

Vienna starts on Sunday with the corona vaccinations – Coronavirus Vienna

Trump’s armaments deal with the Emirates, an hour before Biden …

EU Commission is suing Germany before the ECJ

Covid 19: The delicate search for the origin of the coronavirus