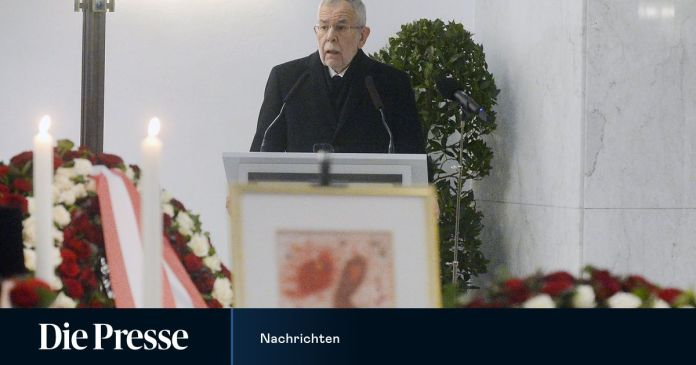 Federal President Van der Bellen spoke at the private memorial service for the 92-year-old universal artist. His urn is buried in a grave of honor at the Vienna Central Cemetery.

The  universal artist Arik Brauer, who died on January 24th at the age of 92, was bid farewell on Tuesday afternoon at the Vienna Central Cemetery. Due to the corona regulations, the funeral service only took place in a small group with no public. Among the invited guests was Federal President Alexander Van der Bellen, who praised the deceased for his lifelong “will to walk upright”.

“A voice has fallen silent. And it wasn’t just any voice,” said Van der Bellen. Brauer always took a stand, but without his voice being loud or aggressive. “It was clearly audible, but it was quiet – in the past you would have said: noble. And his whole person was noble,” said the Federal President.

He recalled Brauer’s childhood, which was marked by persecution by the National Socialists. “Nobody can forget such a childhood and nobody should forget.” In Brauer’s case it was “the starting point for an attitude towards life that was characterized by an unshakable humanism”.

At the approximately half-hour memorial service, which took place in camera due to the corona-related maximum number of 50 people, mainly family members were present. Brauer’s daughters Timna, Talia and Ruth read during the ceremony “Freedom”, a poem by their father, who was also a musician, painter, graphic artist and set designer.

Pianist Rudolf Buchbinder also bowed. “Friendship is so natural when it is there. If I am supposed to imagine that this matter of course should no longer be possible, only then do you feel how incongruous it is to have a friend,” he said to the mourners. He always admired Arik Brauer for being “human”. This was like a rainbow for him – and a rainbow can also be compared with friendship: “

The re is no beginning and no end. And there are far too many colors to describe them.”

Brewer gets grave of honor

Vienna’s City Councilor for Culture Veronica Kaup-Hasler (SPÖ), the married couple Samy and Haya Molcho and Danielle Spera, director of the Jewish Museum Vienna, were also among the invited mourners. After the festivities, the urn was to be buried in a small family circle in an honorary grave of the City of Vienna.

In the morning the public had the opportunity to say goodbye to Brauer and to sign a condolence book. Hall 2 was open between 9 a.m. and 12 p.m.

The  universal artist, born Erich Brauer on January 4th, 1929 in Vienna, died on January 24th at the age of 92 with his family. As a painter, Brauer was one of the main representatives of the Vienna School of Fantastic Realism, but also succeeded as a graphic artist, set designer and singer (“Sein Köpferl im Sand”, “Sie ham a Haus builds”).

Olympic torch relay: start in Fukushima without spectators – journey through...

After the accident: S-Bahn traffic between Frankfurt and Bad Vilbel impaired...

New album from singer Nick Cave: All alone on stage

Flappy Bird and other curios

All bus routes are now in one hand – between Neckar...