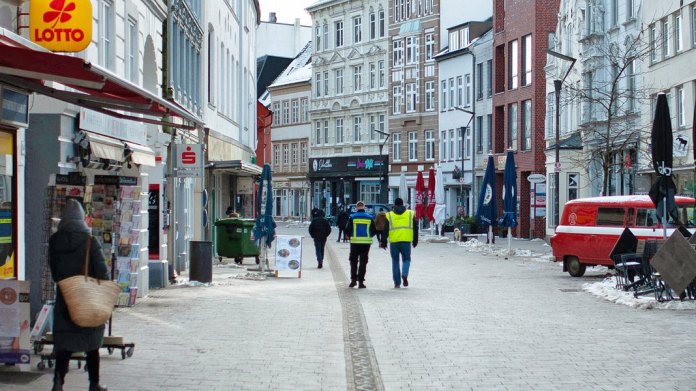 After a conversation with the mayor of the city of Flensburg, Simone Lange (SPD) and the district administrator of the Schleswig-Flensburg district, Wolfgang Buschmann (independent), further restrictions were agreed for the city and district, said Prime Minister Daniel Günther at a press conference in Kiel .

“ The  situation in Flensburg is not getting any better,” said Günther. According to the state government, the infection rate is diffuse in all parts of the city. From Saturday, there is therefore a curfew from 9 p.m. to 5 a.m. – initially for a week with the option of a further seven days if there is no significant improvement in the situation. In addition, a household will no longer be allowed to meet another person in Flensburg. “I know that this is a further restriction on people’s freedom. But we simply notice that the measures taken so far are not enough,” explains Günther.

The  contact restriction applies in public and in the private sector.

Flensburg currently has around 190 corona infections per 100,000 inhabitants in the past 7 days and is the only municipality in Schleswig-Holstein that is still in the three-digit range with this value.

In Schleswig-Flensburg, the opening of primary schools will be postponed – it will remain with emergency care. In addition, according to Günther, the rules that already apply in Flensburg will be applied in the Schleswig-Flensburg district from next Saturday. This means that there is an extended mask requirement, and you can only go shopping alone.

In addition to the tightened measures, more tests are to be carried out in the municipalities. Health Minister Heiner Garg said that up to 230,000 rapid antigen tests from the state’s reserve should help set up municipal test centers.

The re, people in Flensburg and in the Schleswig-Flensburg district should be able to be tested for free. It is his expectation and his request that the rules are observed, so Garg.

RKI evaluation: Flensburg is a stronghold of mutations

The  Evaluation of the RKI from February 10th on the so-called ad-hoc survey shows abnormalities in more than half of the cases around Flensburg. According to Garg, the British virus variant is currently responsible for around a third of the infections in the city. During the survey, samples were examined for mutations between January 22 and 29, 2021. Everywhere else in Schleswig-Holstein and in most regions of Germany the proportion is below 20 percent.

FFP2 mask compulsory from Monday: What you need to know

Britney Spears: Baby happiness for the singer? Your boyfriend wants...