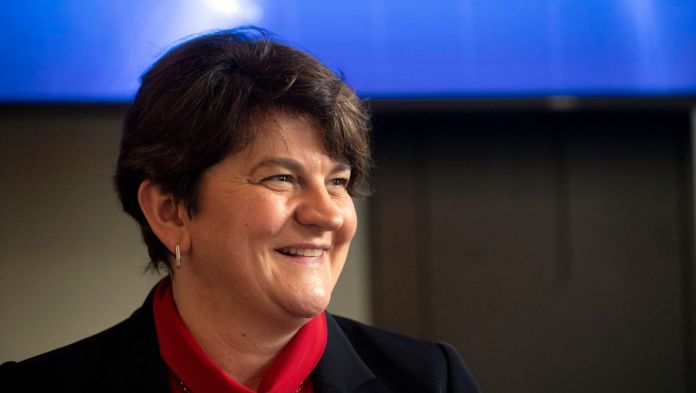 The  Northern Irish Democratic Unionist Party (DUP) is planning a lawsuit against the Northern Ireland Protocol from the Brexit Treaty between Great Britain and the EU. That said the DUP chairman Arlene Foster.

The  party criticizes that this creates barriers between Northern Ireland and the rest of the UK.

The  protocol violates the Unification Act of 1800, in which Great Britain and Ireland were united – and the Good Friday Agreement of 1998, which ended the decades-long Northern Ireland conflict.

The  background: After Brexit, Great Britain also left the EU internal market and the European customs union at the turn of the year. For Northern Ireland, a separate protocol was agreed in the Brexit Treaty to prevent border controls between Ireland and Northern Ireland – in order to counter the risk of a bloody conflict flaring up again.

As a result, Northern Ireland is leaving the EU customs union, but – unlike Great Britain – continues to apply the rules of the European internal market. For goods imported from Great Britain, the product and hygiene standards must therefore comply with EU regulations. This required controls in trade between Great Britain and Northern Ireland.

The  result: a goods border in the middle of the kingdom. This is exactly what the pro-British DUP is now opposed to.

The  dispute was exacerbated by a mistake by the EU Commission on the subject of corona vaccines: It had initially considered restricting vaccine exports to Northern Ireland due to the shortage. For this she wanted to use an exception rule of the Brexit protocol agreed with London. After massive protests from Great Britain and the EU member Ireland, Brussels quickly dropped the plan.

Brussels and London are now working to resolve the problems related to the Northern Ireland Protocol. EU Commission Vice President Maros Sefcovic and the British State Secretary for Cabinet Affairs, Michael Gove, announced after deliberations a week ago that they would “spare no effort” to find solutions. A meeting of the responsible joint committee is to be called by next Wednesday.

Mass tests in Vienna will take place from December 2nd to...

Corona: vaccination is about to start – questions and answers |...