(Motorsport-Total.com) – “I was only slightly injured,” says Romain Grosjean about his serious Formula 1 accident in Bahrain. This accident was almost three months ago, but Grosjean struggles with the consequences every day, as he explains in an interview with SRF: “In the morning when I wake up, it’s not easy to move my hands.”

Romain Grosjean had long bandages on his hands, but they are now off

Grosjeans hands are among the “three percent of my body” that were burned in the accident.

The  left hand in particular was severely affected, as documented by photos published in January.

But Grosjean has no choice: he has decided to continue his motorsport career and will compete in the US IndyCar series in 2021. That’s why he has to face the handache, over and over again. “I move my fingers three thousand times a day because that’s the only way to get my mobility back,” he explains.

Why Grosjean wanted the painkillers away

However, Grosjean speaks of “a terrible feeling when I try to move my fingers”. That is “painful”, especially since he stopped taking painkillers weeks ago, “because I had enough of them,” he says. “I didn’t want to take it any longer. To no longer have to rely on the medicine, that was a big psychological step for me.”

However, he cannot do anything about the accident images that constantly come to mind. Even more: the longer ago the crash happened, the more multifaceted the accident becomes in Grosjean’s memory, which he himself describes as “already crazy”.

The  15 most spectacular photos

For example: “I told everyone there was no fire in the cockpit.

The n I saw the images from the onboard camera that have not yet been made public.

The  fire is everywhere. Just everywhere. My brain seems to have suppressed this information according to the motto: What does it change? Nothing immediately. “

Grosjean describes the acoustics in a fire accident

How do you imagine that? So: “

The  noise is quite loud, like opening the window on the motorway.

The  air as it flows into the car is similar to that in a fire.”

F1 safety: the analysis of the Grosjean accident in Bahrain

The  Formula 1 safety concept has done a great job: In the video we analyze the accident damage to the vehicle from Romain Grosjean to Bahrai More Formula 1 videos

He also had the smell of burning carbon fiber “only recently”, stresses Grosjean. “Suddenly it was there again. That only happened in retrospect. It was not important at the time of the accident [für den Körper].”

“What does it matter whether I smell the carbon fiber fire or not? My brain has taken in all this information, but only saved it,” says Grosjean. “That information only came up recently.” And they will probably keep Grosjean busy for a long time to come.

Agrana has had a good quarter

Coronavirus in the US: Biden wants a million vaccinations a day

Leni Klum already modeled with her mom as a child

Kanye West: I just want to play – rapper flashes for... 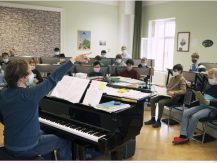