As soon as the Hanau memorial demo started on Saturday afternoon on Neukölln’s Hermannstrasse, it stopped again. Too many people are pouring out of the S-Bahn station to take part in Berlin’s largest memorial event for the victims of the Hanau attack a year ago.

It is waited another 15 minutes until the protest march has finally positioned itself and several thousand, mostly young Berliners, are moving towards Kreuzberg.

The  Hanau attacker murdered nine people and his mother on the night of February 19, 2020. Nine people whose looks did not fit into the murderer’s racist worldview.

The  names of these nine take center stage on this sunny Saturday afternoon in Neukölln. Again and again they are read out, chanted, and reminded of them on posters and banners.

The  protesters held signs and photos with the names of the nine killed. “Hanau was not an isolated case” was written on posters.

The  train was accompanied by around 80 emergency services. Various anti-fascist initiatives such as the “Migrantifa” and migrant organizations called for it.

The  demonstration with 900 participants was registered.

In several speeches, the official investigation of the attack in Hanau is criticized. “What the state doesn’t do, we do ourselves,” says a speaker on Flughafenstrasse, adding: “We always remain strangers to Germany. What we need is organized, migrant anti-fascism ”.

The  demo should end in the afternoon at Oranienplatz in Kreuzberg. Until then, the crowd should continue to grow, and many people will only join the memorial procession as the protest continues.

An old friend is apparently celebrating her comeback

Joy under the tree: the best last-minute gifts | DIE... 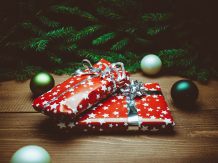