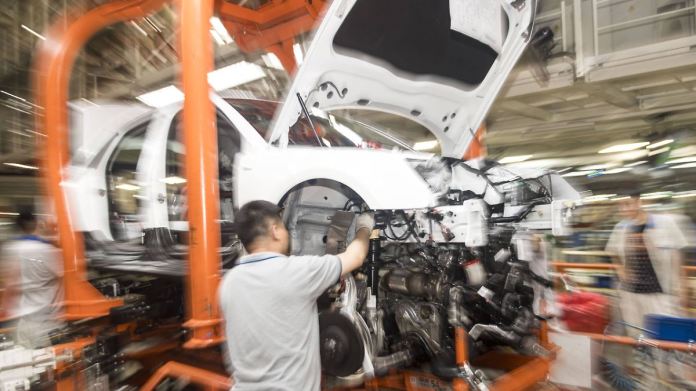 When a car company calls, its suppliers fulfill every request – usually immediately. This is how car manufacturers are used to. But when it comes to the manufacturers of the currently urgently needed microchips, VW & Co. have to take a back seat. Missing components are likely to slow down production for a long time.
In the chip crisis, the buyers of the big car manufacturers find themselves in an unfamiliar situation: For many semiconductor manufacturers they are no longer the most important customers, but have slipped backwards in the pecking order. You are left with a difficult choice: Do not pay higher prices and do not replenish your stocks, you risk further production downtimes.

The  Corona crisis illustrates the gap between the automotive industry, which has been spoiled by their parts manufacturers with just-in-time deliveries for decades, and the semiconductor companies that do not want to submit to this dictate. “

The  automotive industry is used to the fact that the value chain is automotive-centric,” says McKinsey partner Ondrej Burkacky. “What has been overlooked is that semiconductor manufacturers definitely have an alternative.”

The  shortage of chips in the automotive industry has its origins in March 2020: At the height of the Corona crisis, plants around the world came to a standstill, stores were closed, and sales collapsed. Many car manufacturers therefore canceled orders from their suppliers. At that time, however, the chip market was bought empty by manufacturers of smartphones and consumer electronics, whose products were booming. This experience has an impact: For chip factories, doing business with electronics groups is lucrative, because they buy more modern, more expensive components than car manufacturers. Now that they have restarted their production and demand has recovered, they have to get in line.

Several large car manufacturers had to temporarily shut down their production lines because they did not have enough parts for the new cars. At Renault alone, this will probably affect the production of 100,000 cars this year. Car manufacturers are calling for help in the conflict. Audi boss Markus Duesmann spoke out in favor of greater support for the semiconductor industry and other key technologies in Europe.

The  CDU politician expects investments of 50 billion euros and announced that the state will bear around 20 to 40 percent of the investment volume. Volkswagen blamed the suppliers for the upheavals. After all, the manufacturer pointed out to the chip companies in April that a strong recovery was imminent in the second half of the year.

But with this objection, the car giant meets with little understanding from the chip manufacturers: “Last year we had to send our workforce on compulsory leave and bear the costs of the overcapacities,” says an insider from a European semiconductor manufacturer who did not want to be named. “If the automakers ask us to invest in new capacity, can they please tell us who will pay for this excess capacity in the next downturn?”

Every electric car contains semiconductors worth several hundred euros. Overall, the auto industry buys chips for around $ 40 billion a year – but that’s only about a tenth of the global market. Only Apple spends more on the chips in its iPhones, calculates Neil Campling, an analyst at the asset manager Mirabaud. In addition, the semiconductors that are used in cars are built comparatively simply and only generate low margins. Chip manufacturers therefore prefer to invest in more sophisticated and expensive products, for example for smartphones. “

The  suppliers say: if we continue to produce the car stuff, it can’t be shipped anywhere else. Sony or Apple can’t use it for the Playstation 5 or the latest iPhone,” says Asif Anwar, an expert at Strategy Analytics.

Low point is still to come

At the same time, the chip companies complain about a lack of understanding among car companies for their operational processes. “We got a call from an automaker who was desperately looking for parts,” said an insider from another European chip maker. “

The y said: Why don’t you put on a night shift to increase production? What they didn’t understand is that we’ve been working night shifts for a long time.”

In order to remedy the deficiency, the largest European car chip manufacturer Infineon and the supplier Bosch have already drawn up plans for new factories. But there is no quick fix in sight. Highly specialized semiconductor manufacturers such as Infineon outsource part of their production to the large chip factories in Taiwan.

The  Asian factories are in full swing, but have shifted their priorities to consumer electronics.

Even if they were to switch their production again, it would take a long time.

The  experts at IHS Markit assume that the delivery times have doubled to 26 weeks and that the low point in the delivery quantities will be reached in March. This puts the production of a million cars at risk in the first quarter alone.

The  head of the French-Italian chip manufacturer STMicroelectronics, Jean-Marc Chery, assumes that the bottlenecks will last until the middle of the year. In the short term he gives the former premium customers little hope: “Until then, the automotive industry will have to work with scarce stocks.”

Lockdown will probably be extended and tightened – News & reports...

Fruit recall at Rewe because of mold toxin – healing practice

TV producer and director Ronald P. Vaughan has passed away

Turtel picture for a birthday: Your new one declares love for...

Sophia Thomalla in a latex Christmas look: “Santa is a woman”

1244 dead in one day: RKI registers the next sad record