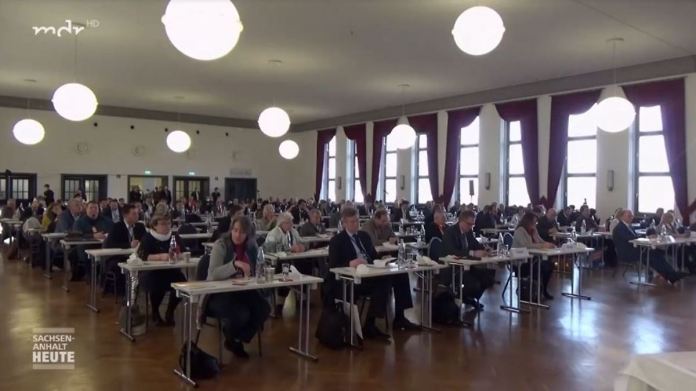 Party congress without masks
Criticism of CDU in Saxony-Anhalt

At the state party conference of the CDU in Saxony-Anhalt, the delegates sit in their seats without masks.  The  result: widespread criticism, also from within the own party. However, the SPD met on the same day, partly also without a mask.

The  CDU Saxony-Anhalt is under criticism because of a party congress that was held without breathing masks. FDP Vice Wolfgang Kubicki told the “Bild” newspaper that at the meeting in Dessau, “apparently no mask requirement was demanded,” does not fit “at a time when political decision-makers are also imposing the toughest restrictions on fundamental rights on the CDU. Criticism also came from the SPD -Politician Florian Post and the CDU member of the Bundestag Jana Schimke. FDP leader Christian Lindner said that if you can protect yourself, then “not only at the party congress, but also in retail and in the catering trade”.

The  CDU had drawn up their lists for the federal and state elections at a state party conference on Saturday. A video from the MDR shows that delegates do not wear masks at the party congress.

The  CDU justified this by stating that all participants had to do a corona test before entering the hall.

The  mask was only allowed to be removed from one’s own seat.

The re, too, masks were not always worn in the squares, as another MDR report shows.

The  CDU was also criticized for the fact that hardly any women were elected to promising places: on the list for the federal election there are eight men and one woman, on the list for the state election there are only one woman in the first ten places. Schleswig-Holstein’s CDU education minister, Karin Prien, wrote on Twitter that the state list of party friends in Saxony-Anhalt for the federal election with only one woman in the first nine places was “not a reason to beat yourself on the chest, but rather an indictment of equality “.

China is preparing for an insecure world – with consequences for Germany

“Mentally suspicious”: Police are looking for a woman and her baby!

This is how the new CDU boss ticks – Armin Laschet...

Again tears of disappointment instead of joy at Kramer

Rhaetian Railway: “The situation is relaxing a bit”