The  judgment in the Maudet case has been passed.

300 daily rates of 400 francs on probation – this is the verdict for the Geneva State Councilor Pierre Maudet (42). In addition, Maudet has to pay CHF 50,000 into the Geneva treasury as compensation. This is the verdict of the single judge of the Geneva Police Court. Maudet was found guilty of taking advantage.

“I wanted to protect my family”

The  trial of Maudet lasted a week.

The  public prosecutor’s office accused him of taking advantage. It was about a luxury trip to Abu Dhabi that he took with his family and his chief of staff in 2015. Flight in business class, suite in a five-star hotel, invitation to the Formula 1 race: at the expense of the Crown Prince of the emirate, the Geneva government council had a good time.

In May 2018, the media in western Switzerland brought the political scandal to light. Maudet first claims to have paid for the trip out of his own pocket. As the pressure rises, he admitted he lied. “I wanted to protect my family – and I made a spontaneous and stupid mistake,” he later explained in a BLICK interview.

What does that mean for the election on March 7th?

For Maudet – once the shooting star of the FDP Switzerland and Federal Council candidate, now a non-party who is fighting for his political survival – the verdict comes at a politically decisive point in time. After the government had withdrawn his last dossier as a state councilor, the now non-party announced his resignation last autumn. But he wants to run again.

The  replacement elections will take place on March 7th – in less than two weeks. (sf)

Test offensive – So now: The Federal Council wants free tests for everyone – but there is still a catch

Another incident with Boeing 737 Max

Cautious praise and harsh criticism of Kurz’s trip to Israel

Man turns to tobacco shop after a fire attack 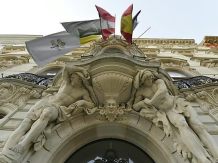 PS5: Sony console won by teenager – Cancer boy gets it

Winter 2021 will be dramatic and soulful Robert Lewandowski from FC Bayern was about to move to Manchester...