The  Geneva State Council let itself be fed by the ruling family in Abu Dhabi, says the police court.

The  politician has to pay 50,000 francs into the state treasury.

Pierre Maudet accepts the judgment motionless. He keeps his head down, just not making eye contact with the courtsPresident Sabina Mascotto, dhe reads the riot act like a little child. She thinks Maudet is guilty, the Geneva State Council has been convicted.

After the verdict remains Maudet in the courtroom for minutes sit. Finally, in front of the Palais de Justice, he makes a brief statement.

The  verdict is «obvious» and «partially satisfactory». It is not yet legally binding. Maudet’s attorney immediately announced that they would appeal the verdict.

Voting in the city of Zurich

Government executes the death penalty by lethal injection – despite protests 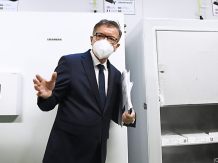 More than 6,000 deaths from Corona in Austria – Coronavirus –

TIROLER TAGESZEITUNG “Leitartikel” from December 15, 2020 by Christian Jentsch “Too...