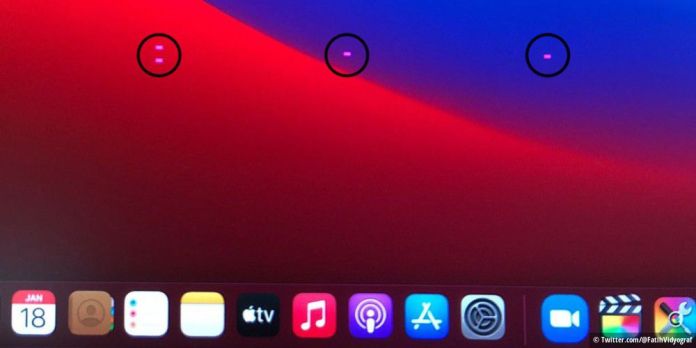 
More and more users are reporting problems with external monitors that are connected to the Mac Mini with an M1 chip.

According to an internal memo from Macrumors, Apple has registered a problem with the new M1 Mac Mini and wants to find a solution as soon as possible.

The  bug can arise when an external monitor is connected to the Mac Mini. Users had reported the problem in various forums, including Reddit and Apple’s own support forum.

For those affected, the connected monitor shows a series of peeing rectangles on the display.

The se are not particularly large, but of course they are still annoying.

The  problem arises mainly with a connection via HDMI, while Thunderbolt is less affected.

Apple does not mention a date for the fix, but has published a possible workaround to help users with the problem:

If the pink rectangles have still not disappeared, the user should repeat the steps.

This display bug joins a whole series of problems with the M1 Macs, but most of them are of a minor nature. For example there were problems with the screen saver and Bluetooth connections. From a technical point of view, this is hardly surprising, as we are experiencing the first generation of a new hardware-software combination that Apple developed from scratch. It is now important for customers that Apple recognizes these problems and offers solutions in a timely manner.

Long queue for the big chopsticks party in the KitKatClub –...

Nuremberg residents don’t have to freeze: Kraftwerk gives the all-clear after...

2. Bundesliga: Fans of the Erzgebirge Aue despite a ghost game...

Reconciliation among the Greens? – SWR news

Christina Ricci feared for her life in lockdown