The  22-year-old Slovene prevailed over 162 kilometers from Al Ain to Jebel Hafeet on 1,025 meters in the uphill duel in front of defending champion Adam Yates (Ineos Grenadiers) and celebrated his first win of the season at his team’s home game.

The  Belgian Harm Vanhoucke (Lotto Soudal) and the Portuguese Joao Almeida (Deceuninck – Quick-Step) followed on the other places. Sensational seventh and thus the second best German professional was Florian Stork (DSM), 54 seconds behind.

Germany: Laschet should replace Kramp-Karrenbauer at the top of the CDU...

“Christmas Daughters” on ZDF: Christmas Eve as a half-sister drama 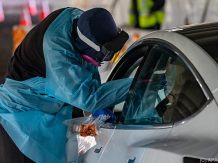 New high of corona infections reached in the USA – Coronavirus...

Laptops can now be removed from the wheel more easily