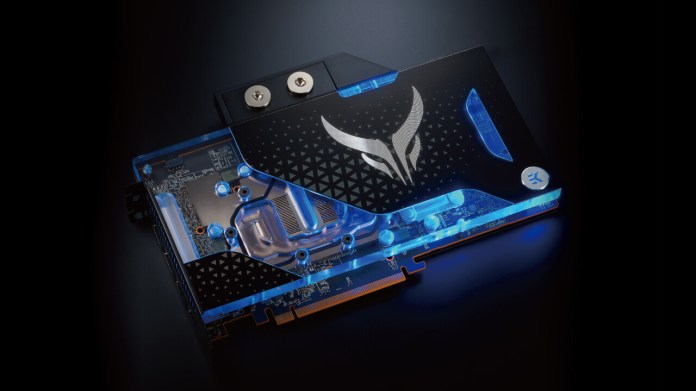 The  PowerColor Radeon RX 6900 XT Liquid Devil with full-cover water cooler from EKWB is about to be launched and is now appearing on the network for the first time. After PowerColor had already been promoting its upcoming top models at the beginning of January, the first pictures are now making the rounds.

Two new Liquid Devil are in the starting blocks

At that time, PowerColor caused a stir with the Radeon RX 5700 XT Liquid Devil and advertised the graphics card, which is factory-set with a boost clock of 2,070 MHz, as “fastest Radeon RX 5700 XT in the world“.

With the two models Radeon RX 6900 XT Liquid Devil and the Radeon RX 6800 XT Liquid Devil, which are also equipped with a full-cover water cooler from EK Water Blocks, two successors based on the RDNA-2 architecture are already in the starting blocks.

The  website VideoCardz has already been leaked image material, at least for the former.

The  PCB of the Radeon RX 6900 XT Liquid Devil is the same custom PCB as the PowerColor Radeon RX 6900 XT Red Devil, which means that the full-cover water cooler from EKWB will also be a special model specially adapted for this graphics card.

Visually, the EKWB cooler corresponds to that of the PowerColor Radeon RX 5700 XT (title picture) and, as in November 2019, the two new “liquid devils” will also receive a so-called “Liquid Devil Dye Pack” with three coloring agents for individual design of the coolant in addition to the assembly material enclosed.

Risk of infection despite the mask when sneezing and coughing

Next terrible fall after Braathen: Ford hits the face