The  allegations against him weigh heavily, says Thorsten Klahold. In the literal sense of the word: the stack of paper he received in December from the law firm in Frankfurt am Main on behalf of Lego weighed almost 700 grams.

The  document contained a number of allegations, some of which Klahold described as “ridiculous”, others as “sad”, and still others as “absurd”. In addition, the request to submit a declaration of cease and desist with criminal penalties. “Of course I didn’t,” says Thorsten Klahold on the phone. He also says: “I consider this an attempt to intimidate.”

The re he offers shelving kits for small houses, vehicles and sights that can be assembled from plastic bricks with knobs on the top. Klahold also sells the stones online.

An unsuspecting customer who saw them would probably say Lego to them. But that would be wrong. “Lego” are just bricks that the Danish company also made itself. Otherwise it is better to speak of “clamp blocks” or “knob blocks”, says Thorsten Klahold – especially if you want to avoid stress with Lego. In the mountain of paper that reached the dealer in December, lawyers accuse him of selling figures that he should not have been allowed to sell. Klahold says Lego’s approach is systematic.

He’s not the only one who receives letters alleging allegations, warnings or demands from Lego lawyers.

The re is a dispute over technical terms, head shapes of plastic figures, assumed intentions and resented manners. What may sound entertaining to outsiders is a struggle for existence in a multi-billion dollar industrial sector. And one that is increasingly threatening to end in a PR disaster for the world market leader Lego.

In January the dispute reached a new level of escalation.

The  Frankfurt terminal block dealer Thomas Panke, who runs the popular “Held der Steine” channel on YouTube and presents a wide variety of terminal block combinations there, quoted in a video with pleasure from another brief from the Lego lawyers: He should delete some of his videos immediately, because he referred to competing products as “Lego” blocks. In doing so, he violated the rights of Lego, as the group owned a so-called word mark. All of this is true.

However, it is disputed among lawyers whether Lego is actually entitled to this word mark or whether the word Lego is not more of a generic term – just as the actual brand name “Jeep” has become such a term for off-road vehicles as a whole, “Flex” for angle grinder and ” Walkman ”for an antiquated music player.

Until two years ago, Thomas Panke only sold Lego products in his shop, and now he is one of the group’s sharpest and loudest critics. He claims Lego has deteriorated a lot.

The  company tries to “take a maximum amount of money from its customers for products that are really getting worse and worse”.

Panke’s descriptions of individual Lego products are also becoming more and more devastating, sounding like general accounts, peppered with hilariously packaged malice: Panke calls the assemblable Ferrari model from Lego “shabby”, “grits” and “scrap”, which the offshoot “Lego Friends” mocks he as “rarely stupid” – basically it is “grotesquely insulting that it even exists”.

The re are now quite a few of them.

The y are called Cada, Cobi, Qman or Xingbao. With BlueBrixx there is also a German manufacturer that is based in Flörsheim near Frankfurt in Hesse and is expanding rapidly.

The  more rigorously Lego takes action against alleged violations of its critics and these defend themselves publicly, the more attention they are certain to receive, although the Danish company rarely appears in a sympathetic light. Lego’s approach is reminiscent of the clumsy attempts by US singer Barbra Streisand to stop the publication of an aerial photograph of her property.

The  picture was part of a series of 12,000 photos that were available online and documented erosion damage on the California coast and was initially unnoticed.

However, when Streisand went to court and sued the photographer and the website for $ 50 million in damages, fans and the media became aware of the issue, the photo of the villa was shared thousands of times online and can still be found today without any problems.

The  unwanted dissemination of information by attempting to suppress it has since been known by Internet users and crisis communicators as the “Streisand effect”.

“Stay away from this set!”

Panke’s channel “Hero of the Stones” gained tens of thousands of subscribers through Lego’s letter and its publication. Now people who had never heard of Thomas Panke until a few weeks ago can enjoy drastic purchase warnings such as “Stay away from this set!” Or “

The  quality is subterranean!”

In the case of a spaceship kit, Panke diagnosed “everything that goes wrong with Lego”, namely “quality problems, ignorance of the content and brazen pricing”.

It’s a dilemma for Lego. Because the group is not only entitled, but downright obliged to act against provocations like the latest one from Thomas Panke: According to the law, the owner of a word mark must actively protect it, otherwise he could lose it. This is a matter of course in other industries.

Google, for example, successfully pushed for the Duden to delete the verb “googeln” as a synonym for using a search engine. After all, only those who use Google can google.

The  problem is that current business practices among market participants are difficult to reconcile with the image of the supposedly healthy toy world.

The  first time that Panke received unpleasant mail from Lego was two years ago. At that time, the company pointed out to the dealer that his “Held der Steine” logo showed a blue stone with three studs on it in the background, thereby violating the rights of the Danes. Panke responded with a sarcastic video that caused Lego outrage from terminal block fans for weeks.

The  resentment became so great that Frédéric Lehmann, head of Lego Germany, apologized at the official press conference at the Nuremberg Toy Fair and admitted that he had “not communicated properly”: “It would have been better to pick up the phone and just speak instead of writing letters. ”

His marketing expert announced “big learning” and that it would be better next time.

In fact, when Thomas Panke was asked to delete his videos this January, he first got a call:

The  law firm informed him that he would soon receive a letter.

It’s not that Lego invented the knob. As early as the 1930s, toy building systems made of compressed wood or rubber blocks with small knobs on the top existed. After the end of the Second World War, companies from Great Britain and the USA brought the first plastic blocks onto the market. One of them was called Elgo. In 1958, the Danish company Lego applied for a patent on building blocks – with the special feature that these were not completely hollow on the underside, but rather had small tubes to which the knobs of the block below can be clamped.

The  patent expired in 1978, and anyone can now produce and sell terminal blocks. Lego also no longer has a patent on the small toy figures that come with the boxes – but still a so-called 3D brand. This does not protect any technical inventions, i.e. no functions, but the optical uniqueness of a product.

Who does the square head belong to?

The  3D brand is why Thorsten Klahold, the building block dealer from Paderborn, is now having trouble with Lego.

The  company accuses him of circulating competitor sets, including figures, that could be confused with Legos figures. Including those that hardly look like Lego men to laypeople, for example because they have oversized or square heads. On the phone, Klahold says that it seems as if the company is looking for ways to “secure the right to the human body in the world of terminal construction”.

However, Lego writes: “We only take legal action when it is necessary.” Because if you buy Lego, you get a product “of impeccable quality”. Against “intended product similarities” of other manufacturers one takes action to “ensure that the consumers are not deceived”.

Elsewhere it does not stop at lawyers’ letters. At Klaus Kiunke, head of the German competitor BlueBrixx from the Hessian Flörsheim, two bailiffs were surprisingly in the office. “At first I thought they’d come for an interview,” says Kiunke on the phone. In fact, they came to confiscate a number of boxes containing figures that Lego had complained about. Since then he has received mail from the law firm several times. “We are being bombed,” he says. “It’s just annoying.” Lego’s strategy cost him “sleepless nights and a lot of money for his own lawyers”.

The  behavior is also harmful for his customers. In this way, figures that are far superior to those from Lego are also kept away from the German market: those by the Chinese manufacturer Zhe Gao, for example, can bend their arms, turn their hips, stand on one leg and bend their head forward.

This year courts will decide which characters Klaus Kiunke will be allowed to sell in the future. If Lego has its way, BlueBrixx would even have to remove the replica of Neuschwanstein Castle from its range, because there are two tiny, immobile figures on the battlements of the roof as decorations.

At the same time, Kiunke retaliated and applied to the “Office of the European Union for Intellectual Property” in Alicante, Spain, for the deletion of Lego’s 3D trademark. A decision should be made by summer.

In the battle of the Davids against Goliath, Thorsten Klahold, the stone seller from Paderborn, has another idea. On his channel “Johnny’s World” he recently suggested whether all those affected and upset should not initiate crowdfunding – in order to then be able to pay for a so-called traffic report, which uses a market survey to determine whether Lego has long been a generic term. “Most people don’t know any other word for it, they don’t really say terminal block.”

He has received a lot of enthusiastic feedback on his suggestion, says Klahold. And commitments to contribute money.

The  German provider BlueBrixx wants to expand further this year and open twelve shops across Germany, possibly one in Berlin, says Klaus Kiunke. Lego has already warned him of an “increase in the risk of injury through expansion”, which means that the expansion of Kiunke’s activities also increases his risk of committing further legal violations.

The  BlueBrixx boss quoted from the letter in a YouTube video shortly before the turn of the year. He says: “It would be better if Lego invested less in the legal department and more in its own product development.” For all sides.

Left boss Bernd Riexinger: “That’s why we can’t go on with... 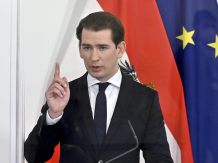 Heidi Klum: Model job for daughter Leni – and we hear...