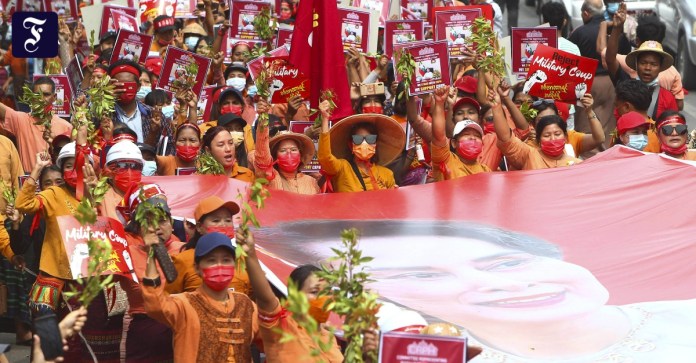 NAfter the deaths of two other demonstrators in shots by the security forces in Myanmar, governments and international organizations have sharply criticized the military in the Southeast Asian country. UN General Secretary António Guterres condemned the actions of the authorities in Myanmar against the protest movement against the military coup around three weeks ago. “ The  use of lethal force, intimidation and harassment of peaceful demonstrators are unacceptable,” Guterres wrote on Twitter. Everyone has the right to assemble peacefully.

The  State Department spokesman in Washington expressed the US government’s “deep concern” that the Myanmar security forces had shot at protesters.

The  United States was on the side of the people in Myanmar, it said.

EU Foreign Affairs Representative Josep Borrell also condemned the military’s actions against peaceful demonstrators: “I call on the military and all security forces in Myanmar to stop violence against civilians immediately.” On Monday, the Council of EU Foreign Ministers will review the latest developments in Myanmar discuss in order to then be able to make “appropriate decisions”, announced the external representative. According to reports, the EU could also impose new sanctions against high-ranking military officials in the Southeast Asian country.

Germany also responded to the violence in Myanmar. “

The  German government condemns the violent actions of the Myanmar military and reiterates its call to end the violence against demonstrators and instead open up to a dialogue that enables a return to the democratization process,” said a spokeswoman for the Federal Foreign Office in Berlin on Sunday. “

The  Internet company Facebook announced meanwhile that it had blocked a news site operated by the military leadership in Myanmar.

The  site of the “True News Information Team” of the army had been blocked for repeated incitement to violence, Facebook announced on Sunday.

Around three weeks after the coup, the pressure on the leaders of the military coup on February 1st is growing. It is noticeable that some of the ten member countries of the Asean national association, to which Myanmar also belongs, have also found unusually clear words against the military’s actions.

The  Southeast Asian Association follows the principle of non-interference in the internal affairs of its members. But after the death of two demonstrators by gunfire on Saturday in Myanmar’s second largest city, Mandalay, even the normally very cautious city-state of Singapore had managed to make a clear statement.

The  use of lethal weapons against unarmed civilians was “inexcusable,” said the Foreign Ministry. “We are dismayed at the reports of civilian casualties as a result of the use of lethal force by security forces against protesters in Myanmar.”

A further escalation would have serious negative consequences for Myanmar and the region, the Singapore Foreign Ministry warned. For days now, Indonesia and Malaysia have also been trying to organize a special meeting of the Asean foreign ministers on the subject.

The  Indonesian Foreign Minister Retno Marsudi traveled to Brunei, which will hold the Asean chairmanship this year, and to Singapore.

The  city-state occupies a key position, not only because it is supposed to have connections with the generals. Singapore is also the most important source of FDI in Myanmar by international standards.

Escalation was not hidden from the diplomats

The  gradual escalation of the situation was not hidden from the diplomats from the city-state. In the past few days, the police and military in Myanmar had used live ammunition several times to fire as a warning in the air, but in some cases also at the demonstrators themselves.

The y had gathered near a shipyard to support striking workers who were being forced to go back to work by the authorities. Around 20 vehicles with soldiers and police officers had been brought to the place to break up the rally. On Sunday, some demonstrators also took part in a funeral procession for the 20-year-old woman who had died of severe head injuries on Friday. She was allegedly hit by a police bullet during a protest in the capital Naypyidaw on February 9 and has since been artificially kept alive.

ROUNDUP: Sport and culture rely on spectators – ‘showing politics a...

Brexit: No Deal “the most likely outcome”

DFB-Pokal: Kalajdzic shot Stuttgart into the next round

Schneider in front of Schalke-Aus – Fan protest: “Regardless of whether...