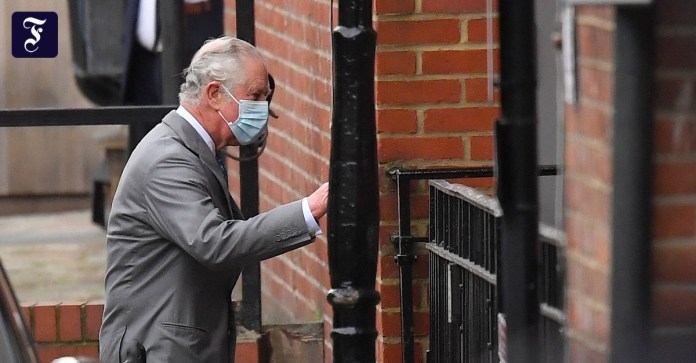 On the way to his father: Prince Charles on Saturday in the King Edward VII clinic in London
Image: Reuters

The  Duke of Edinburgh, Prince Philip, is still in the hospital, but in good spirits. His son paid him a visit on Saturday.

Dhe British heir to the throne, Prince Charles, visited his father, Prince Philip, in the hospital on Saturday.

The  72-year-old stayed in the King Edward VII clinic in London for around half an hour in the afternoon, as reported by British media.

The  99-year-old husband of Queen Elizabeth II was admitted to a private London clinic for observation on Tuesday evening – a purely precautionary measure, according to the palace.

The  stay should not be related to Corona. Philip and the Queen both received their first corona vaccination in January.

The  Duke of Edinburgh is in good spirits, but will probably stay in the hospital until next week, it said recently.

The  Queen and other members of the royal family continued to attend official appointments. Observers had initially seen this as a reassuring sign of the Prince Consort’s state of health.

Doctor dies in an ice crash: her friend speaks in BILD...

Missed the federal corona PK? The most important in 5...

Demos in France against police violence

Cologne lost 0: 3 in Hoffenheim – Kramaric with a record...